If you haven’t had the chance yet to play with a Canik TP9 variant—more specifically, the Canik TP9 Elite Sub-Compact pistol—we strongly suggest you do. Let’s back up a moment so we can all be on the same page. Bear with me here. 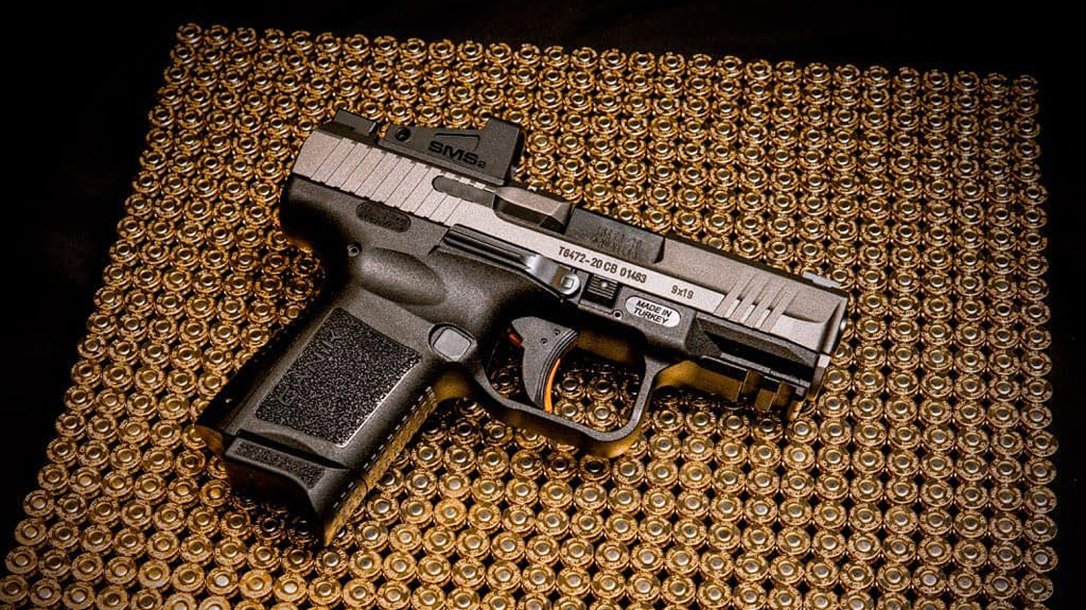 Canik is a firearms manufacturer with deep roots in Turkey. The Turks have a reputation for their attention to detail when it comes to their firearms. They’ve been doing this since the 16th century.

We can remember when Caniks first made their way across the ocean and into the showrooms of American gun shops. Back in those days, Canik was an entry-level pistol brand at an inexpensive price and loosely resembled the Walther P99. Then, someone over at Canik got really serious and revamped things on their end. Canik stepped up their game, and with the help of Century Arms, transformed the TP9 into an even better pistol. Since then, many offspring variants have been produced.

The Canik TP9 has been in service with Turkish military and law enforcement agencies for many years. If a country trusts its national sovereignty in part to a Canik TP9, one can surmise that it’s been field tested extensively. Actually, the TP9 was made famous back in 2016, when it was the handgun of choice for the Turkish assassin who used it to punch the ticket of the Russian ambassador to Turkey.

Enter the Canik TP9 Elite SC. During the 2019 Athlon Outdoors Rendezvous, we spotted one of these new heaters on the firing line. Aesthetically, it caught our eyes right away. The very first things you notice are the tungsten-color Cerakote slide and black frame. The slide is precut for mounting an optic.

Front and rear serrations are thoughtfully cut into both sides of the slide. This makes for a quick and easy press check. The model sent for assessment and trials has a blacked-out, serrated rear sight and a phosphorous white-dot front sight.

Next, you’ll notice the easily accessible slide release catches on either side. Also, a push-button magazine release is easily reversible from one side to the other. This makes the Canik TP9 Elite SC 99.9 percent ambidextrous, which is the sign of a great combat-ready handgun. Many shooters who have larger-sized mitts or hold a high grip have issues with inadvertently bumping the slide release. This results in the slide failing to hold open after the last round.

The Opinion of Others

We passed around the TP9 Elite SC to a few shooters who have larger hands. There were no issues, and nobody inadvertently bumped the slide release. The checkering on the front and back of the grips—as well as the light factory stippling on the sides—helped keep the TP9 Elite SC firmly in everyone’s hands.

You will immediately notice how solid the Canik TP9 Elite SC feels in your hand. Weighing in at 24.78 ounces, it’s actually comparable in weight to the Glock 26 (at 21.71 ounces) and the Springfield Armory XD9 SC (23.6 ounces). That’s not too shabby, especially considering that the Glock 26 has only a 10+1 capacity, and the TP9 Elite SC holds 12+1 rounds with no extension and 15+1 with the extended magazine.

Also very notable is the loaded chamber indicator on the top of the slide, just behind the chamber opening. It isn’t oversized, but rather just the right size to be able to feel it, if it were pitch black and you couldn’t do a press check. When you look at the back of the striker plate, you will notice, plain as day, the red firing-pin indicator, denoting that the firing pin is in “rock ‘n roll” mode. This doesn’t mean that there’s one in the pipe—it’s just letting you know that it’s ready if you are.

One of the Canik TP9 Elite SC’s best features is its trigger. The only other striker-fired pistol on the market with a better trigger right out of the box is the Walther PPQ. The trigger on the TP9 Elite SC is what helps put the “Elite” in its name. It’s easily denoted by the red trigger safety.

Pressing the trigger provides a very smooth pull. You can feel the tension increase, all the way to the crisp break at the end. The reset is quick, so that the trigger is ready to squeeze again. Our Wheeler Trigger Pull Gauge measured the TP9 Elite SC’s trigger consistently just a hair under 4.5 pounds. This is an ideal weight for an everyday carry (EDC) pistol.

One reason for the trigger being so nice is that, according to Canik, the small parts and internal components of the TP9 Elite SC are all nitrided or high-wear nickel-coated. This gives lubricity to those hard-to-reach parts, thus helping them to move more fluidly.

Another cool feature is that you get plenty of extras, right from the factory. An included second backstrap is also in the case. There’s even a synthetic holster the user can configure for either inside-the-waistband (IWB) or outside-the-waistband (OWB) carry.

Canik includes two magazines: the standard 12-round mag and a 15-rounder with finger rest. They pack a whole lot into this deal to make it that much better.

When it comes to holsters, the sky is the limit. Just make sure that you purchase a custom fit model specific to the Canik TP9 Elite SC. You are going to want the trigger covered and some retention that holds the pistol snugly. We chose two holsters for this pistol that we feel are great fits. The first is a Kydex OWB holster from 3 Aces. It will hold the TP9 Elite SC even when it’s being shaken upside down.

If you want to step it up and go fancy, we would suggest the truly unique VersaCarry Compound Series Holster. This one is made from water buffalo leather and has a layer of polymer sandwiched between two layers of leather, so your slide won’t get marred over time, yet the holster still maintains its rigidity. This holster is for shooters who want something nice and that will be comfortable to wear for extended periods of time.

Thanks to the Canik TP9 Elite SC’s match-grade, nitrided barrel, hits were consistent, and made the shooter’s job that much easier. Recoil is snappy, as one would expect from a 3.6-inch barrel. However, the extra couple ounces of weight in the TP9 Elite SC made a difference. It felt less snappy than other comparable subcompacts.

To prove that point, we brought out a brand-new Glock 26 (Gen4) for comparison and a few mags for each pistol. (This is where Glock fans are going to hate me.) We fired a magazine from the Canik, set it down, fired the Glock 26 and repeated this drill for several magazines.

We consistently had more fun and better accuracy with the Canik TP9 Elite SC than we did the Glock 26. Please don’t take our word for it—go shoot one for yourself first and you will see what we’re talking about.

Out of the Box Performance

I already mentioned the Canik’s impressive trigger. I did no maintenance or apply any lube during testing. The ambient temperature outside during initial accuracy testing was a cool, crisp 29 degrees F.

There aren’t a whole lot of wind breaks out here in the Western plains, where we’re located, so it was C-O-L-D! Even so, the Canik TP9 Elite SC never once jammed or produced any stoppages of any kind, despite the diet of ammo it was fed. We even reached into the bottoms of some of our range bags to grab the assortment of “mystery brands” of 9mm ammo floating around there. Nothing stopped this beast from howling.

While I’m a huge fan of Federal Syntech Training Match ammunition, it came in a close second this time, with a 1-inch grouping at 21 feet. The winner was Wilson Combat’s Bill Wilson Signature Match 147-grain Hornady ammo. It’s designed for 4-inch and shorter barrels, and scored a mind-blowing 0.8-inch group, resulting in a single jagged hole in the paper plate.

The Canik TP9 Elite Sub-Compact is like a finely tuned race car that won’t bleed you out when you get to the cash register. At an MSRP of $440, you’ll feel as though you’re getting much more than you’re paying for. I’ve also been able to find the gun at just under $400 from a few dealers.

How Century Arms can sell such a great pistol for such an inexpensive price is anyone’s guess. There’s no denying that the quality is there. Granted, we ran only 500 rounds through it—but that is the usual “break-in” period for most pistols before we’d even consider carrying them.

As far as this TP9 Elite SC is concerned, we can’t get the credit card out fast enough, so it looks like this writer will be shopping for holsters. You can buy this one without any reservations, and have money left over for a case of ammo and a holster. Win-win!

This article was originally published in the Personal Defense World June/July 2021 issue. Subscription is available in print and digital editions at OutdoorGroupStore.com. Or call 1-800-284-5668, or email subscriptions@athlonmediagroup.com. 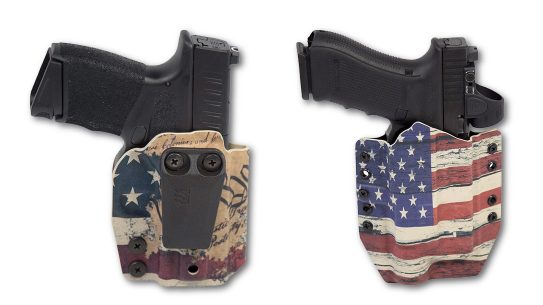 A new program at Blackhawk now allows you to select the features of your...