Building on the success of its Limited-Edition Rigger, the Rigger EDC flipper from Magpul features the same design, different materials. Much like its namesake, the Rigger EDC was designed to work smarter, not harder. Its materials and design work together, beautifully to facilitate this principle. 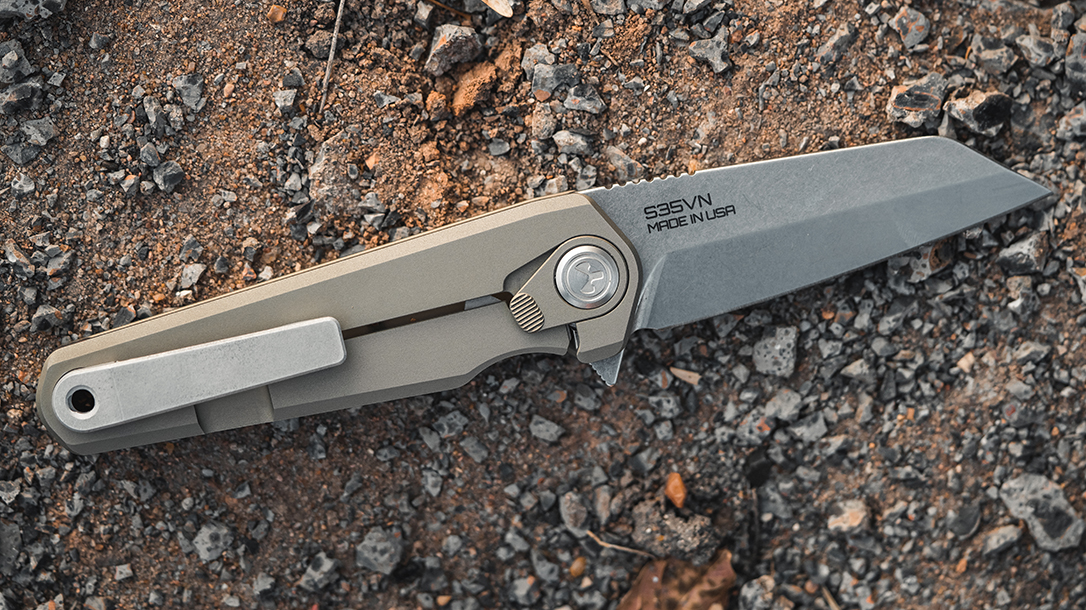 Unlike the Limited-Edition Rigger, the Rigger EDC is built on a 7075-aluminum frame, with internal lightening pockets. Because of the thick aluminum, the rugged construction has no spacers, aside from the thick spacer at the butt. The grey aluminum frame has a slight brushed feel, making it very supple in the hand.

The blade is constructed of CPM S35VN stainless steel and maintains excellent edge retention and corrosion resistance, as a result. With a modified Wharncliffe blade, the Rigger fits both the general utility and self-defense categories, simultaneously. Due to its unique design, the Wharncliffe profile places maximum force at the tip. As a result, it excels at both exact cutting utility and slashing defensive uses alike.

The 3.4-inch blade features a flat saber grind, with a shoulder that runs just below the center of the blade. As a result, there is a little more meat behind the edge than would be on a high saber grind. This helps to instill a robust edge for harder utility type chores; however, the factory edge is still very keen.

The tumble finished blade features a slight curve to the edge, to aid in slicing chores. Likewise, a small section of jimping on the spine promotes a secure grip while bearing down. Unlike the Limited-Edition, which rides on Caged Ceramic Bearings, the Rigger EDC functions on stainless-steel bearings. This is one of the most meaningful differences I have found. Although, the Rigger EDC still comes to lockup quickly and smoothly.

The aluminum handle of the Rigger EDC tapers from the hilt to the butt and has very clean, elegant lines. However, the only retention provided comes in the form of a finger notch. Although the design is clean, I would have liked to see some kind of swell at the butt for additional retention.

When closed, the blade nestles very smoothly with the grip, and aside from the flipper, nothing protrudes from the knife. Consequently, this results in a sleek presentation. Because of the flush fit, the only actuation mechanism is the flipper, which includes slight jimping. For this reason, the blade cannot be opened by any other means.

Once actuated, the blade comes to complete lockup, utilizing a strong frame lock. Due to the aluminum construction, the frame lock includes a steel lock insert, to prevent wear to the aluminum. To aid in a secure lockup, the Rigger utilizes a secondary locking feature, which slides over the frame lock, preventing it from moving during heavy use.

Finally, for purposes of easy maintenance, the Rigger utilizes only two screws in its construction. Both screws feature a large, flathead design, allowing for easy removal with a large flathead screwdriver or penny.

I have a friend, Michael Janich, of Martial Blade Concepts, who is a huge proponent of the Wharncliffe profile for self-defense. Due to the straight edge of the Wharncliffe profile, it cuts with the same pressure along the entire length of the edge. Although it is a little less so with a modified Wharncliffe, such as seen on the Magpul Rigger EDC flipper, it still applies. Even though the edge has a slight curve in a modified Wharncliffe, it is not significant enough to nullify the effect.

The dramatic drop at the tip of a Wharncliffe creates an acute point. As a result, when slashing, the tip reaches its target earlier than a traditional drop point. For this reason, the tip acts as a force multiplier, helping to open the wound channel. Then, with the equal strength along the rest of the following edge, the cut continues, full strength throughout.

Although I have used Magpul products for years and have never had an issue, I never recommend anything without putting it through its paces. With a design perfect for utility, the Rigger deserved utility style testing.

To start, I decided to check the tip sharpness and slice thin strips from some heavy-duty leather I have on hand. Although the leather is almost as thick as the blade itself, the tip sliced off the thin strips like butter.

Next, is a test I perform a lot, because heavy-duty military nylon gun belts can be difficult to cut. They are especially difficult to cut cleanly. The Rigger sliced right through the nylon gun belt with no issues or snags. Even better, the cuts were very clean, which can be rare for this test. Usually, I get some kind of fraying at the cuts, but not so in this case.

I then moved on to a test of the edge retention, by cutting an old power cord and stripping a small section. Using a rubber mallet, I batoned the edge through the cord at different points on the edge. After I had cut off six pieces, I took a close look at the edge and found no dulling, curling or deformation.

To verify the edge withstood the previous test, I took some old half-inch climbing rope and pressed the edge through. The edge was still keen enough to be able to cleanly slice right through the thick rope. I repeated this test multiple times, with the same result every time.

Finally, as one final test of edge retention, I cut up some old, corrugated cardboard. Due to its construction, with heavy glues and other materials, cardboard is very hard on an edge. The Rigger made it through the entire process unscathed.

After all of the testing, I was still able to get clean slices on a phonebook page. However, there was one spot that was kind of catching. Although a quick once over with a strop will fix that right up.

Although the Rigger EDC is not a budget knife, it is well worth the price of admission. Comparatively, it is about half the cost of the Limited-Edition Rigger, with just a few small differences. Namely, the aluminum handle as opposed to titanium and Micarta. Also, stainless-steel bearings instead of Caged Ceramic help to keep the cost down. However, these differences do not limit its excellent capabilities.

If you are in the market for a solid utility EDC, you can’t go wrong with the Rigger EDC from Magpul. Whether you prefer the higher grade Limited-Edition or the production Rigger EDC, you will still get outstanding performance.

The Magpul Rigger EDC flipper is available now with an MSRP of $239.95. For more info, please visit Magpul.com.