How do you improve upon a titanium and stainless suppressor that handles everything from 9mm to .45-70 Gov’t?  It’s not easy, but SilencerCo found a way. The new SilencerCo Hybrid 46M modular adjusts for both caliber and length. It gives shooters the ability to utilize the same suppressor for a range of cartridges. Better still, it enables shooters to shorten the length to better balance their firearm. 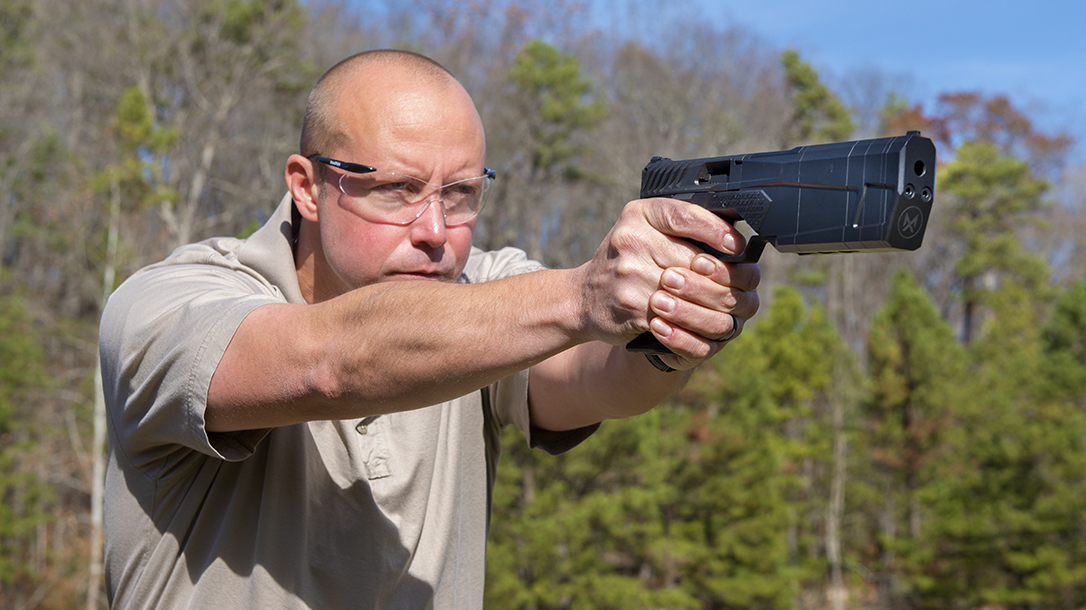 We tested the Hybrid 46M in the Utah desert in a variety of calibers and platforms. The results didn’t disappoint. From a distance, the Hybrid 46M looks identical to its predecessor, the Hybrid 46. Upon closer inspection, the Hybrid 46 features a threaded interface with spanner wrench notches. The system allows the shooter to remove roughly two inches from the business end of the suppressor. The main body attached to the muzzle remains the same, but the ‘front module’ and caliber-specific end cap are removable.

The end cap and front module threads are identical so the switchover to the short configuration requires only two steps. After the two-inch front piece is removed from the main body, the end cap unscrews from the front piece and is reattached to the shortened end of the main body. The conversion takes under a minute on a cold “can” under normal conditions. Note: Be careful to not wrench your parts together beyond the hand-tight spec.

Our field test spanned a range of calibers and platforms, starting with handguns and ARs. It ended with a lever-action “buffalo bore” .45-70 Gov’t.  On handguns, the most immediate benefit of the 46M’s modularity is the obvious center of gravity shift when two inches of titanium and steel are threaded off the end. On a .45 ACP 1911, the balance improvement is noticeable. Firing standard-issue 230-grain cartridge, the audible discharge change from the full-length configuration was negligible. Neither setup impacted the sometimes-finicky 1911 recoil energy requirement to cycle the action. As cool as the idea of firing a pistol with a suppressor might be for those imagining themselves on the silver screen, in truth, a can makes any pistol of any caliber somewhat unwieldy, so the 2.7-ounce/2-inch carve-off is an easy and practical adjustment.

Moving to AR platforms with more overall mass that mount to the shoulder and move the center of gravity closer to the shooter, the modular setup becomes more personal preference than a functional trade off. The choice is whether the shooter wants a slightly quieter and softer firing sequence, or shorter length. Throughout the test, neither the author nor bystanders used ear protection, or needed it. In both 300 BLK and .45 ACP, the short and long AR configurations of the Hybrid 46M were comfortable and, more importantly, functional. There were no cycle failures with the change in the length of the suppressor. While the audible discharge with the shorter configuration was noticeable, it could be measured by comfortable volume changes, not hypodermic needle stabs of inter-cochlear pain.

The big test was with the .45-70 lever action. It shouldn’t have been a worry, but the 325-grain cartridge is large and heavy enough to throw at someone and hurt them, much less fire it through a rifle. In truth, it’s a blast to shoot a big lever-action gun with a suppressor. Silencerco’s specs advertise a 140.7 dB reading at the ear for the .45-70 Gov’t cartridge, which is slightly more than the 46M’s rating for the .300 Win. or .338 Lapua Magnum—both notorious over-pressure bullies.

Though certainly no scientific lab, in the open Utah basin, shooting the .45-70 was comfortable and enjoyable in both configurations. I’d even advocate buying the 46M just to have more fun with big-bore lever actions as the device also dramatically reduces their normal felt recoil, which can be a turn-off for anyone under 350 pounds.  Ultimately, the Hybrid performs as advertised, giving the shooter both a “can-for-all-calibers” with the ability to adjust for length and weight.

The Silencerco Hybrid 46M in the full-length configuration weighs 14.9 ounces (not including the mount) and measures 7.72 inches. In the short configuration, it’s 5.78 inches and 12.2 ounces. The suppressor’s construction combines of titanium, 17-4 heat-treated stainless steel, and Inconel. All units are full auto-rated and ship with a multi-tool, spanner wrench, and a Silencerco ASR mount; as well as a .46 and .30 caliber front cap.

The Hybrid 46M is also compatible with Silencerco’s Charlie line of mounting adapters, including the Charlie ASR and Charlie Direct Thread Mounts; as well as the Charlie ASR Muzzle Breaks & Flash Hiders. For even more info, please visit silencerco.com.

With standard setting features of what concealed carry should be, the Canik TP9 Elite...