About five years ago I decided to give the whole “red-dot sight on your carry pistol” thing a try. After all, I loved my red-dot sight (RDS) on my carbine that I used for raids and arrests. After my first trip to the range, I wasn’t happy. I had trouble finding the dot, and I was slow. Then I learned to line up my iron sights first and the dot would “magically” appear. So, red-dot options like the Springfield XD-S Mod.2 OSP became more intriguing. 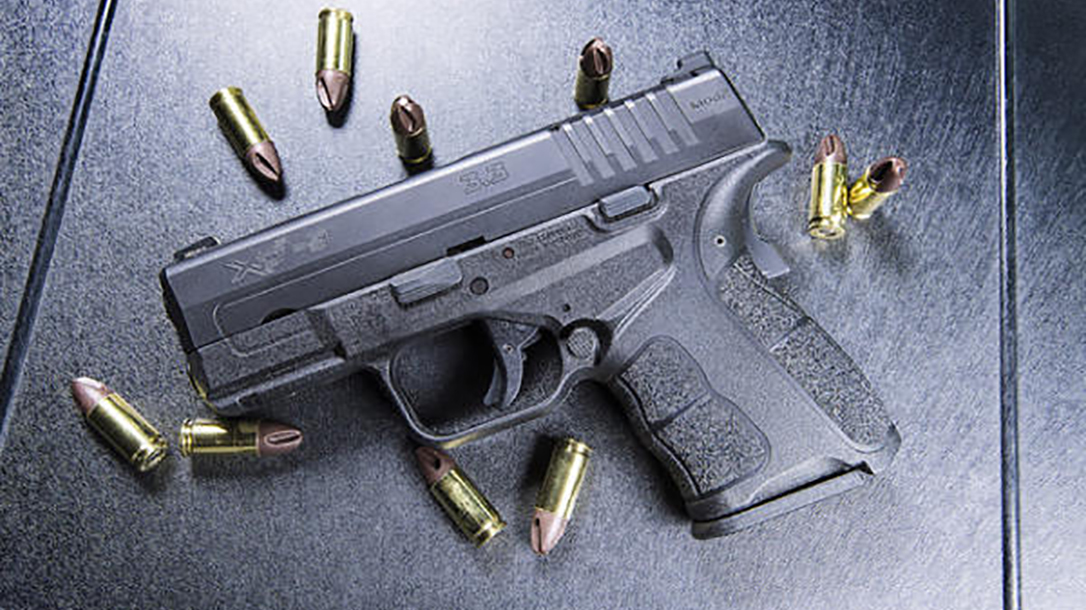 I got better. I still wasn’t as fast as I was with iron sights. But I was a lot more accurate from 15 yards and back. By six months, I was faster with the red-dot than with iron sights and I could rain in death from 50 yards without even trying. It had been a longer road than when I went from iron sights to a red-dot sight on my M4, but it was certainly worth it.

Fast forward to the fourth annual Athlon Outdoors Rendezvous, near Driggs, Idaho. I met with Alex Joseph and Steve Kramer from Springfield Armory. They had a pistol to show me, but I had to keep it a secret until they made a formal announcement. They showed me their XD-S 9mm single-stack, which they originally released in 2013 and rereleased as the Mod.2 with several upgrades in 2018. But this one was different.

The slide arrived ready set up to take a red-dot sight. Springfield calls their handguns that can take red-dot sight OSPs (for Optical Sight Pistol). I told Joseph and Kramer they should sell it as a package deal with a good-quality red-dot sight already attached. They just smiled—they were way ahead of me. I asked whose red-dot sight they would be using, and they explained they were still in testing, but were down to a short list.

A few months later, my FFL texted and said a package had arrived for me from Springfield. I was at the shop that afternoon, anxious to see the final result. I opened the box, unzipped the black nylon bag and there was a Crimson Trace CTS-1500 red-dot sight bolted onto the slide of the Springfield XD-S.

Now, Crimson Trace knows a thing or two about building robust electronics that can hold up to recoil. The new CTS-1500 has no visible controls: no on/off button and no brightness controls. It turns on automatically when moved, and the 5.0-MOA dot is auto-dimming based on the ambient brightness.

The pistol comes with virtually every bell and whistle you could want. First, like the other micro 9mm single-stacks, it is amazingly thin—less than 1 inch wide—and concealable. It is striker-fired and has the passive grip safety found on almost all 1911s and XD series pistols. The slide and hammer are Melonite-coated, so you aren’t going to have to worry about the gun rusting when you wear it every day inside your waistband. It comes with a seven-round and a nine-round extended magazine.

The steel sights are standard height and dovetailed into the slide. They co-witness with the CTS-1500, just in case you have a dead battery or the sight somehow gets broken. The frame is black polymer with an enhanced grip texture. Springfield goes the extra mile and adds an accessory rail onto the gun.

I am a huge believer in white lights on my guns, even my everyday carry guns. The lights today are small enough and powerful enough to make it worth it. According to the FBI, more than two-thirds of all law enforcement shootings happen in reduced-light settings. I am sure most other shootings have a similar percentage. White lights are crucial to differentiate friend from foe and to blind a potential attacker.

Finally, the gun has an ambidextrous magazine release. No, it’s not reversible—it has buttons on both sides, so it is already set up for a speedy reload for you or your wrong-handed, I mean left-handed, buddy.

Mounting a red-dot sight in a non-standardized world is tricky. Most optics-ready pistols have a milled-out section with a couple of screw holes and a bunch of plates to act as adapters between the slide and the RDS. Springfield decided to set up the XD-S Mod.2 OSP with screw holes for the Shield Reflex Mini Sight Compact, the first red-dot sight designed specifically for micro 9mm pistols.

The CTS-1500 has the same screw hole pattern, which allows it to be mounted without the hassle of an adapter plate. This is why it sits low enough that you don’t need suppressor-height sights to co-witness through the window.

A polymer adapter plate is included, in case you want to remove the CTS-1500 and use only iron sights. The grooves on the plate marry up perfectly with the cocking serrations on the slide, which shows Springfield’s attention to detail.

Normally I test full-sized handguns at 25 yards for accuracy. Compacts are tested at 15 yards, Subcompacts are at 10 yards, and micro pistols should probably hang out in the 7-yard arena.

These are defensive handguns designed to save your life from an unexpected attack. However, if I shot this gun at 7 yards, I know it would have just cut a single ragged hole with virtually any ammo I used. I headed back to the 15-yard line, confident the XD-S OSP was up to the challenge. I was right. The shot groups were amazingly small, even at 15 yards.

Benched at the 15-yard line, I noticed a few things. First, this was a typical trigger for a striker-fired pistol, which means it is anything but crisp. It has a relatively long take-up, and the break is kind of mushy—just like they all are. The reset provides a positive “click” that you can hear and feel. For a close-quarters battle weapon, the number one concern is dependability, not having a target trigger.

No sane person would ever take a micro 9mm to a precision shooting competition. (However, with the amazingly tight groups the XD-S OSP shot, maybe I should rethink that.) The trigger pull averaged 6.4 pounds on my Lyman trigger pull gauge. That is just where I want a combat trigger. Much lighter, and it increases the risk of a negligent discharge when drawing under stress. Much heavier, and it hampers your ability to keep the gun aimed in while struggling to squeeze the trigger.

The next thing I noticed was the recoil. Inexperienced people buy little guns because they want them to have less recoil. Nothing could be further from the truth. The bigger and heavier the gun, the less recoil you feel. The XD-S OSP has a trapped dual recoil spring system that tames it as much as possible, but you are still going to feel some muzzle flip, just as with every other micro 9mm.

Finally, I loved the sight picture. The CT-1500 has a relatively big window, and it was easy to pick up the dot—it was never too bright or too dim, whether I had it in the bright sun or in the shadows. The crisp iron sights were also easy to pick up.

I practiced engaging multiple targets while moving and shooting at close quarters. Now the muzzle flip and trigger were far less noticeable. The gun ran like a champ and never had a single malfunction all day.

However, I caused a few malfunctions. I tend to grasp the gun fairly high up on the grip, and my thumb touches the slide release. Several times the slide couldn’t lock to the rear on the last round fired because my thumb was holding it down. Again, this has been standard operating procedure with me and all the micro 9mms I have tested. Tiny guns simply don’t have a lot of real estate to put the controls, and they are harder to run.

Would this stop me from carrying this gun for every day self-defense? Absolutely not. A five-shot J-frame revolver doesn’t tell you when it is empty, either. And this gun isn’t designed for extended gunfights. It is designed to be as comfortable as possible when worn all day, every day and then to be able to quickly deliver fight-stopping hits in life-threatening situations. And it does that like a Swiss clock.

Springfield has built a reputation for comfortable and dependable striker-fired, polymer-framed pistols in their XD line. Discriminating buyers have spurred the gun manufacturers to make better micro 9mm pistols with more of the features we like to see in our full-sized guns. The XD-S Mod.2 OSP represents the latest iteration.

With an ambidextrous magazine release, passive external grip safety, accessory rail, Melonite coating and—best of all—a top-of-the-line CTS-1500 red-dot sight, this gun comes packed with the most-requested features. And with an MSRP of $549 (without the CTS-1500, the MSRP is $425) it has a better price than most of the other micro 9mm pistols available today.

This article was originally published in the Personal Defense World October/November 2021 issue. Subscription is available in print and digital editions at OutdoorGroupStore.com. Or call 1-800-284-5668, or email subscriptions@athlonmediagroup.com.

The entry of the LCP II, from Ruger, into the field of tiny ultralight...