Even the most fair-weather James Bond fan can recall the scene in 1962’s Dr. No, where “M” chides the late Sean Connery for carrying an underpowered Beretta. “M” reminds him, “You’re licensed to kill, not get killed.” He calls in the armorer to replace the Beretta with the Walther PPK. Instantly, the PPK became an icon, and the pistol appears both on movie posters and in film. Following in its footsteps comes the Walther PDP. 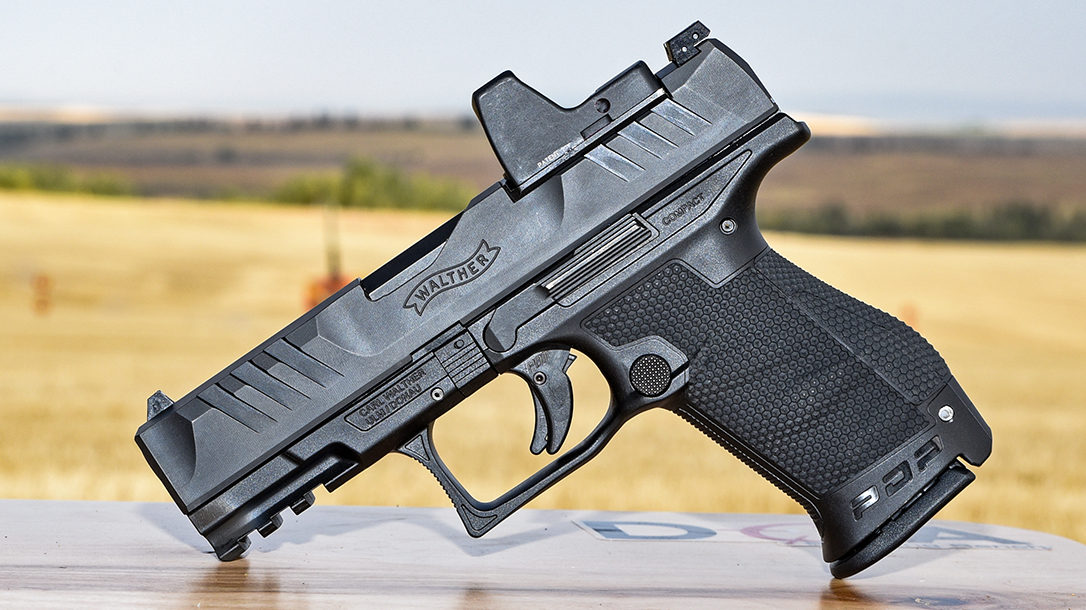 Bond wields the PPK in multiple configurations. From waxing an unsuspecting bad guy with a suppressor attached, to firing from the hip in flight from a villain’s lair. The PPK was the character’s primary sidearm for decades until it was replaced by yet another Walther, the P99, in 1997’s Tomorrow Never Dies. But icons being what they are, the pistol returns in 2008’s Quantum of Solace and again in 2012’s Skyfall, where Bond receives a modified Walther PPK/S 9mm short.

Sitting in London’s National Gallery, the new, Millennial “Q” hands off the Walther, snidely referring to the PPK as “less of a random killing machine and more of a personal statement.” He also hazards, “I can do more damage on my laptop sitting in my pajamas before my first cup of Earl Grey than you can do in a year in the field.” Daniel Craig’s James Bond quips, “So why do you need me?” Q volleys, “Because every now and then a trigger has to be pulled.”

“Or not pulled, it’s hard to know which in your pajamas,” Bond definitively reminds him. With that, the Walther PPK is back in action in the hands of a weathered but always formidable Bond.

But as much as moviegoers love James Bond, it doesn’t mean the pistol Hollywood chose then, or now, merits the hype. But in Walther’s case, they’ve been innovating handguns since Carl Walther and his son Fritz invented the first semi-automatic pistol in 1886. And in 2021, the company released a new duty/carry pistol, the PDP—and it’s a winner.

Building on the design of the PPQ and Q4, the Walther PDP is distinctive in its elegant design and function. But also, ergonomically familiar enough to feel immediately at home in the hands of a shooter accustomed to a polymer-framed duty and defense pistol.

The first thing one notices about the Walther PDP is what’s absent in its feature set for a duty or carry gun—nothing. The PDP isn’t likely to make one trip to the range and then receive an immediate send-off to a gunsmith for serrations, a trigger and a match-grade barrel. Nor will it feel the rage of your soldering iron to add stippling.

The serrations are there—large but not so sharp as to feel like saw blades. Walther refers to them as “SUPERTERRAN,” which might mean something other than “above earth” in German or to machinists. I’ll describe how they function later, but for now, note their smart design.

The stippling is there—rough but not so coarse to shred your hands after a single day at the range. And like most duty guns these days, the PDP comes with a removable panel to drop in your favorite red-dot sight. Ultimately, the PDP balances a broad feature set without trying to be every gun to every shooter.

Designed for Duty and Carry

The PDP is designed as a duty and carry pistol and comes in full size (4.5-inch barrel) and compact (4-inch barrel) configurations. The compact version weighs 1 pound 8 ounces unloaded, including its 15-round metal magazine. The 18-round, full-size version, unloaded with the magazine, comes in at 1 pound 12 ounces with a Leupold DeltaPoint red-dot sight attached.

By way of size comparison, the 9mm Glock G45 is the identical weight and similar in overall form factor to the compact PDP. The notable differences being the Glock 45 (G17 full-sized frame and compact G19 slide) has a polymer rather than a metal magazine and a 17-round capacity.

Controls on the PDP are familiar and exactly where one would expect them. There is no thumb safety, only a trigger safety. The PDP comes with three backstraps for various grip configurations. The stippling is hexagonal on the sides and back of the grip with straight, square checkering on the front. Walther calls it the “Performance Duty Texture.”

The relieved underside of the triggerguard provides a firm and consistent index point for the control hand middle finger. And the squared front of the triggerguard features checkering as well. The button-style mag release is ambidextrous, which means the shooter can set it up for left- or right-hand release. The slide release is also ambidextrous, with fixed controls on both the left and right sides.

There’s a relief cut on the frame above and forward of the trigger where a traditional two-handed grip would look for purchase for the support hand thumb. Cleverly, the traction in the rectangular space is created by cutout letters that read “CARL WALTHER ULM/DONAU.” If you’re a stipple fiend, you might want to rough this area up, but it’s unlikely.

Ergonomically, the PDP is a dream. It has a high beavertail grip, which gets the bore axis down and into your hands naturally each time you grasp the weapon. The sights are three-dot night sights that are both windage and elevation adjustable. Also, the triggerguard is roomy if you have mozzarella sticks for fingers or run gloves.

The magazine release is precisely where you would want and expect it—which is out of the way when you are drawing or firing and at the tip of your thumb when you need to change mags. Finally, both the compact and full-size feature a Picatinny rail mount for lights or lasers.

One of the champagne problems experienced by gun writers is you do a fair amount of shooting. But always with the newest gear purported to be the next greatest thing to hit the industry. Particularly at manufacturer-sponsored events, you are asked to insightfully tease out thoughtful details and overlook the design flaws the manufacturing team had to cross their fingers on to meet the marketing team’s deadlines.

In the case of the PDP, Walther boldly threw the newly designed pistol in front of a gaggle of media shooters and a multi-day schedule of day, night, dirt and high round counts. Clearly, Walther was confident. Having attended my share of dog-and-pony shows, I was skeptical. However, it pays to keep an open mind.

To provide structure and instruction to our time, Walther brought in Tatiana Whitlock and Scott Jedlinski to train through multi-position shooting scenarios and red-dot proficiency. At night, we played with helmet-mounted NODs (night observation devices) and proficiency techniques for incorporating a pistol with lasers.

Every possible opportunity existed for the PDPs to fail—high round counts, dust, wind, day, night and weather changes. Through it all, and to my reasonable surprise, neither my full-size nor compact PDP failed. Not once. No failures to feed, fire or extract. No magazine spring, follower or feed lip issues. Zero.

For a brand new model, I was impressed. Frankly, I expected problems and excuses. It was not because of the company or the people, but simply because we did a ton of shooting (easily over 1,000 rounds), and the PDP was a new design. Bravo, Walther.

So how did the PDP feel to shoot? Remarkably familiar. If you are a shooter accustomed to polymer-framed, striker-fired pistols, the PDP will translate immediately. There’s no neural-physical translation required. If you’ve ever owned a German car, you know what I mean. Buttons are in different spots; the dials look different; the logic is of another culture.

The same goes for some firearms, but not so in the case of the Walther PDP. Just strap in and smash the right pedal down. In fact, some of their ergonomic tweaks, such as the serrations and grip geometry, may make you instantly more efficient, or at least equally as comfortable.

I ran the medium backstrap on both the compact and full-size PDPs, which comes on the pistols out of the box. My thinking was to give them a run and adjust as necessary if I find them tough to control or get hotspots on my hands. Neither happened; I ran them stock without gloves. Whitlock had us rolling in the dirt, switching hands, standing, kneeling, moving, the works. Every opportunity for a wonky grip to botch the reliability was there, to include dirt and carbon buildup as round counts increased. No issues. I kept waiting for one. It never happened.

Jedlinski schooled us on red-dot techniques, and I purposefully and uncharacteristically did not clean my pistol. Still, no issues. Then we took them out at night with lasers and NODs—again, no problems. The shot groups were tight, handling was solid and there was no learning curve due to esoteric features or ‘revolutionary’ design changes.

The only observation I would make was on the trigger. It took a few rounds to familiarize myself with the initial take-up, but the “wall” before the break is as consistent as the trigger weight. Additionally, the reset after the first round is crisp and short. Again, it took a bit of a personal adjustment from tuned striker-fired triggers, but it was minor.

Ultimately, I wouldn’t hesitate to make the PDP my duty or medium-capacity carry gun. If Hollywood movie execs cease the delays and allow the next Bond film, No Time to Die, to hit theaters, perhaps he’ll return with a PDP. The good news is, you can get one first.

This article was originally published in the Combat Handguns May/June 2021 issue. Subscription is available in print and digital editions at OutdoorGroupStore.com. Or call 1-800-284-5668, or email subscriptions@athlonmediagroup.com. 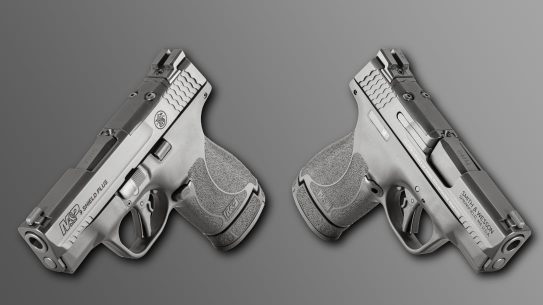 The latest optic-ready M&P9 Shield Plus from Smith & Wesson is a striker-fired option...