The FN 509 Midsize MRD pistol is the poster child of design evolution. This handgun traces its heritage in the FN family tree back to the FN 509 Tactical. Then FN introduced the original 509 and finally, in 2012, the FNS. The striker-fired FNS was a departure from other FN handguns, such as the FNX and FNP series, which are hammer-fire designs. The FN 509 Tactical spawned from FN’s experience with the U.S. Army handgun trials. At least civilians now get to benefit from FN’s experience with the solicitation culminating in the FN 509 MRD. 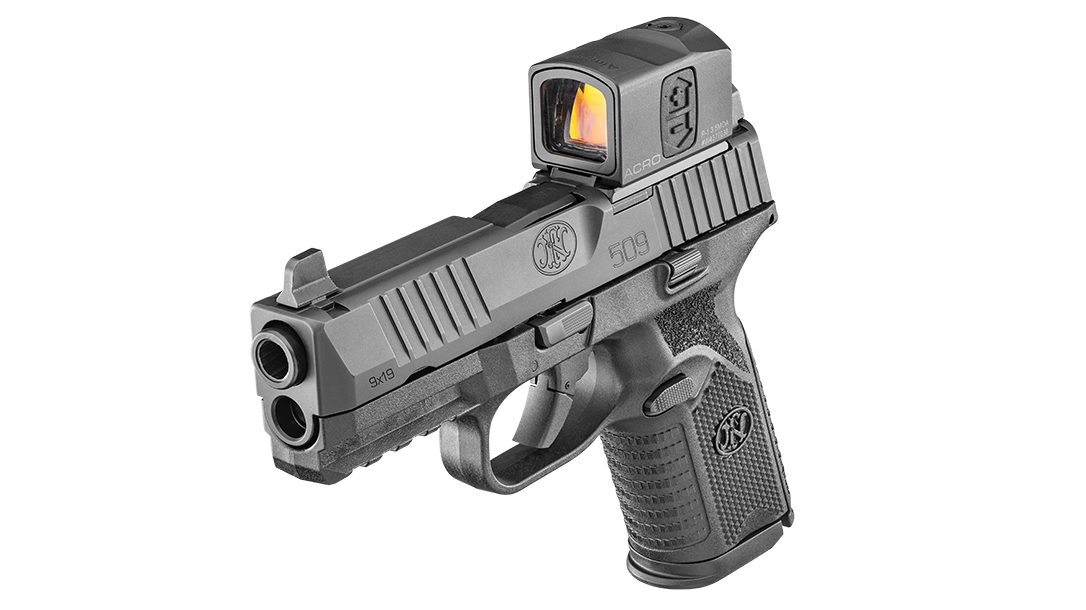 A firearm concept that has remained constant—or stagnant depending on your point of view—is handgun sights. The earliest muzzleloading pistols feature sights that we can recognize today.

Yes, modern open sights are more refined, but the basic form is the same. That is to say, you align the front post with the rear notch. With the popularity of miniature red-dot sights (MRD) in lieu of traditional iron sights, this is going through a change. This is happening across the board for everyday personal defense weapons, law enforcement and military weapons.

The MRD concept seeks to answer how best to enhance the handgun. The solution arrived at was the same as most had already opted for with their rifles: Add a red-dot sight. Orientation of suppressor-style iron sights around the red dot acts as both back-up sights and quickly fixes the shooter’s eye to the red dot stationed above the front post.

The FN 509 MRD arrives with two 15-round magazines—or 10-round magazines for those living in restrictive states. The FN 17- and 24-round magazines are compatible as well, with FN producing a sleeve to fill in the gap between the grip and the bottom of the magazine.

Well-machined front and rear serrations ensure solid purchase when manipulating the slide. The 4-inch, cold-hammer-forged, 1-in-10-inch right-hand-rotation twist barrel has a polished chamber/feed ramp on one end and a recessed target crown on the other. Ambidextrous slide lock levers and magazine release buttons are standard. The polymer frame features a Mil-Std-1913 accessory rail.

The FN 509 MRD package has several tweaks and enhancements beyond the original FN 509, such as co-witnessing suppressor-height sights, a flatter-faced trigger, an improved contoured slide lock lever and an extended extractor that also acts as a loaded chamber indicator.

But the FN 509 MRD features don’t stop there. The modified rear of the slide facilitates the mounting of several of the most popular red-dot sights. FN labels this as its Low Profile Optics Mounting System (LPOMS) that features a series of plates for accommodating at least 10 different red-dot optics.

FN’s LPOMS has a reputation as one of the best multi-red-dot mounting systems currently on the market. The earlier FN 509 Tactical first introduced it. A blank plate covers the rear receiver when no red dot is in place. The plate mates seamlessly to the slide.

An extensive packet of plates, screws and spacers along with a detailed instruction manual comes with the FN 509 MRD. A quick reference indicates what combination of parts to use to mount a variety of red dots, all the while maintaining reference to the iron sights and the pistol’s bore. Having a slide milled to a specific sight limits your flexibility in choosing various red dots. So, the FN LPOMS is the best alternative method.

The FN 509 MRD disassembles quickly via locking the slide open and rotating the takedown lever downward on the frame, freeing the slide from the frame. There’re no evident tool marks or lateral play in the slide’s fit to the frame or barrel to the slide. The barrel locks up tight when in battery.

All of the FN 509-series handguns operate via a slightly modified Browning locked-breech short-recoil method—the locking recess from the barrel to a single locking lug milled above the barrel’s chamber. FN barrels feature a notched groove in front of the chamber that serves as further enhancement. The front contour of the barrel lug cam slot is cut square. As a result, it directs counter-recoiling forces up and forward into the barrel itself to reduce stress on the lug.

FN engineers the MRD’s side mass and shape to increase muzzle control for double-taps or longer strings of fire. A low bore axis relative to the shooter’s hand allows for a very stable sight picture, no matter how many or how rapidly you fire rounds.

Considering that the FN 509 MRD’s design intent as an everyday carry handgun, we decided to dedicate some time to evaluating the FN 509 MRD working around vehicles, breaching facades, approaching door entries and other CQB activities.

Echo Valley Training Center’s on-site Hesco Shoot House and 360 Range were ideal test locations. A premium is placed on a quick-handling, accurate handgun such as the FN 509 MRD with multiple rounds fired in quick succession being the norm to put a target down. The natural pointability of the FN 509 MRD comes into its own in this realm.

A variety of 9mm loads were tested with the FN 509 MRD including Federal Syntech and HST, Hornady XTP and Black Hills Ammunition JHP. We also tried out an ammunition can featuring a smorgasbord of random brands and types. Loads fired spanned 115- to 147-grain with hollow points and FMJ bullet types utilized. Notably, we experienced no malfunctions while test-firing over 500 rounds during the range visits we spent evaluating the FN 509 MRD.

This handgun did not disappoint, regularly producing 2- to 3-inch groups at 15 yards when fired from standing unsupported positions. We couldn’t resist bench testing after witnessing the unsupported accuracy results. Sub-2-inch groups at 25 yards were not unusual. They probably would’ve been smaller, if not for my rudimentary bag support and gritty, heavy trigger.

In my opinion, the hinged nature of the FN trigger with factory pull weight makes the FN 509 MRD a good candidate to receive an aftermarket upgrade in the trigger department.

FN’s inclusion of the suppressor-style iron sights around the red-dot sight acts as both back-up sights and quickly fixes the shooter’s eye to the red dot stationed above the front post. Shooting with both eyes open is strongly suggested; it’s a must to get the most out of the MRD concept. Point shooting with the FN 509 MRD is still very possible using the red dot’s window as a ghost ring—albeit a large ghost ring—if forced to react spontaneously to a threat.

The advantage that red-dot sights offer in the competition environment is well-known. The ability to place the red dot on the target without having to align the front and rear irons proved much more conducive to transitioning between targets.

The FN 509 MRD equipped with a Trijicon RMR came into its own for precise fire at any range desired through placing the dot on the target and applying correct trigger control. Groups with the FN 509 MRD were markedly smaller when a red-dot sight was mounted versus regular iron sights.

This statement became even more true as distances increased. The ability to consistently ring steel silhouette popper targets at 50 yards, and even out to 100 yards with regularity, was validation enough that red-dot-equipped handguns are here to stay.

As many “maturing” shooters can attest to, the single-focus plane of the red dot is simpler to shoot accurately than coordinating front and rear sights. They can now do as nature intends for them to do: focus on the threat with both eyes open. And all simply because the concept uses the eyes in a more normal manner.

The FN 509 MRD’s ergonomics and handling characteristics were quickly appreciated. The grip frame with enhanced texturing and the overall balance of the handgun minimized felt recoil. The key point with the FN 509 MRD is that it is eminently adaptable to individual carry needs thanks to the FN mounting system.

This handgun arrives ready to go right out of the box. Kudos to FN for including the right features for maximizing performance. The FN 509 Midsize MRD is a potent package in any of its possible forms due to its accuracy, reliability and capacity—all of which combine to deliver increased lethality.

The ability to use the FN 509 Midsize MRD as an everyday carry handgun is what sets it apart from other endeavors incorporating red dots on pistols. The FN 509 MRD pushes the envelope past “safe” norms while still maintaining real-world fighting application. The FN 509 Midsize MRD increases the effectiveness of a concealed-carry handgun beyond what many thought possible with the platform.

This article was originally published in the Combat Handguns November/December 2021 issue. Subscription is available in print and digital editions at OutdoorGroupStore.com. Or call 1-800-284-5668, or email subscriptions@athlonmediagroup.com.