To Flee, Or Not? Should You Leave the Scene After a Defensive Shooting?

I don’t usually quote from the Bible in this column, but for this issue’s topic, about whether or not to leave the scene after a shooting, it seems on point. The quote is from Proverbs 28:1: “The wicked flee where no man pursueth, but the righteous man stands his ground as bold as a lion.” 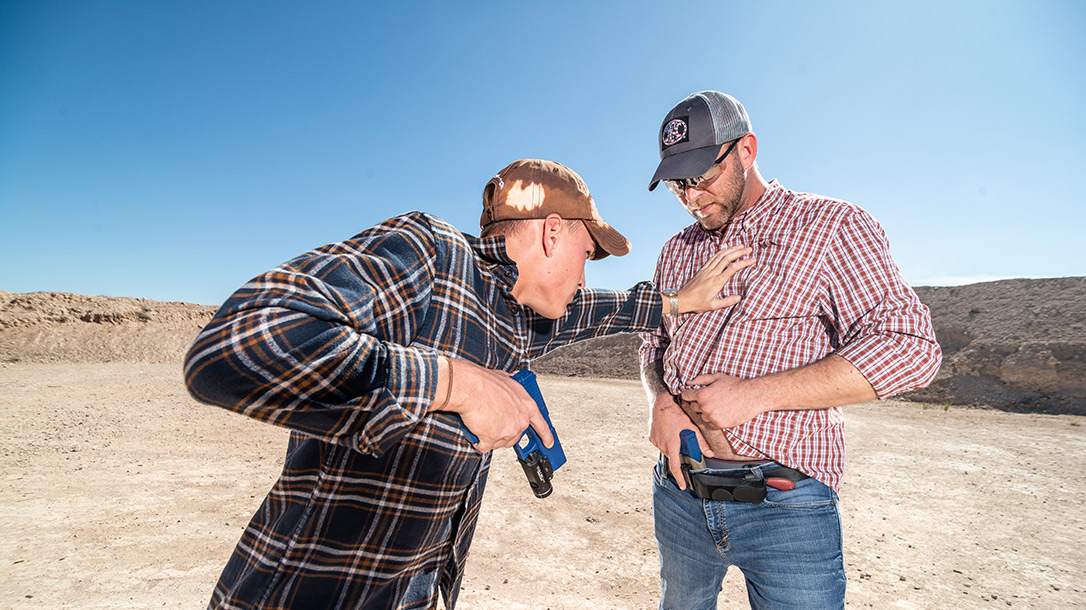 Tactics for Close Quarters Self-Defense when Hands go to Handguns

A Detailed Look at Whether to Leave the Scene

The principle is that the person who has done the right thing in self-defense will remain at the scene to explain his or her actions. It tends to be presumed—by cops and prosecutors, by plaintiffs and their attorneys, and by the general public from which the jury pool is tapped—that the person who fled did so to escape punishment for what they themselves believed to be criminal wrongdoing. The term in court is “consciousness of guilt.”

Having left the scene of the shooting does not automatically convict you as a matter of law, of course. It is very likely, however, that the court will allow opposing counsel to argue that it does.

Case 1 went to the courthouse in August of 2021 in Ohio. The defendant was a young man in his early twenties. He and his friend were both receiving threats from a hulking six-foot-four, 265-pound bully, promising to seriously injure them.

While out of their car, the defendant and his wife were set upon by the threatening party. The attacker punched the wife in the face and then, uttering a threat to kill, lunged at the husband.

The defendant weighed only 150 pounds and knew the other man’s reputation as a bar fighter. Not to mention, he is known to carry a gun at times. The defendant had his back to an automobile and nowhere to run. He believed his only chance was to draw and fire.

He did. His single-shot proved fatal.

With no idea how to handle the aftermath of such a terrifying incident, he panicked and fled with his wife. He later came to his senses and turned himself in, only to be charged with murder.

He had a strong case of self-defense because of the other man’s disparity of force in size, strength, and known ability to cause harm with fists and feet. This was coupled with the dead attacker’s threats. So, apparently, did the prosecutors, who offered a sweet plea deal.

The defendant was aware of the “flight equals guilt” element. On the morning of trial, he told his lawyers he wanted to plead guilty to a lesser offense. So, he chose a few years in prison over the risk of spending decades behind bars.

Case 2, in Massachusetts, was somewhat different. The defendant was a middle-aged man who routinely carried a Glock 23. On one of those proverbial “dark and stormy nights,” he drove to the home of a lifelong friend and mentor who was dying from a particularly pernicious cancer.

The defendant himself was recovering from radical cancer surgery and was in a delicate state both physically and emotionally. He was attacked near his car by two violent young men, one with a knife. He drew and fired a single 135-grain .40 S&W round. The knife-wielder dove into his own car, as did the accomplice, who drove him away where he later died.

This defendant had been trained and knew better, but the trauma of the near-death experience and having to shoot a person, compounded with the physical and psychological debilitation from his recent surgery, was overpowering.

He, too, panicked and decided to leave the scene. Arrested not long thereafter, he was charged with manslaughter. Fortunately, the defense team was able to get the totality of the circumstances across to the jury. As a result, the jury acquitted him of the shooting.

There was a different motivation for the defendant to leave the scene in Case 3 in Florida. The defendant was definitely trained and knew better; he was an ex-cop. When he was attacked in the street, he was legally carrying a North American Arms .22 caliber mini revolver. He was also carrying a large Spyderco knife clipped inside his waistband.

However, in the course of the fight, his opponent managed to snatch the knife from his belt. Now facing an armed man, the ex-cop drew and fired, killing his assailant.

Then, however, he got in his car and drove away. He was soon pulled over by the police, arrested, and charged with murder. He explained that he had no cell phone and was driving to the police station to report what had happened.

The statement was consistent with where he was when he was stopped and arrested. But the jury didn’t believe him. They found him guilty of a lesser included offense of manslaughter. The judge gave him a maximum sentence.

When You Must Flee

What if, you’ve had to shoot a gangbanger in self-defense and other gang members are there, seeking deadly revenge? You have to survive the incident itself or you’ll never have to worry about surviving the legal aftermath.

Always have your cell phone with you, and be the first to call 9-1-1! The first person to call in is generally seen as the victim/complainant. Even if you are somewhere with no cell service, your phone will record to the second what time you tried to call the authorities.

Set your GPS for the nearest police station and head there. If the defendant in Case 3 had done so, he would have had a much stronger and obviously more believable explanation for why he “fled the scene.”

Remember Proverbs 28:1. It’s not that the law is based on the Bible. Rather, the law reflects human values and precepts so long established that they go back to pre-Biblical times.

This article was originally published in the Combat Handguns January/February 2022 issue. Subscription is available in print and digital editions at OutdoorGroupStore.com. Or call 1-800-284-5668, or email subscriptions@athlonmediagroup.com.