Zeus, the Greek god of the sky, ruler, protector, and father of all gods and humans descends in 1911 form. Part of the Gods of Olympus Engravers Series, Zeus is the second in the series, following the Poseidon. Likewise, the limited-edition Zeus custom 1911 from SK Arms will be an instant collector’s item, with only 200 available. 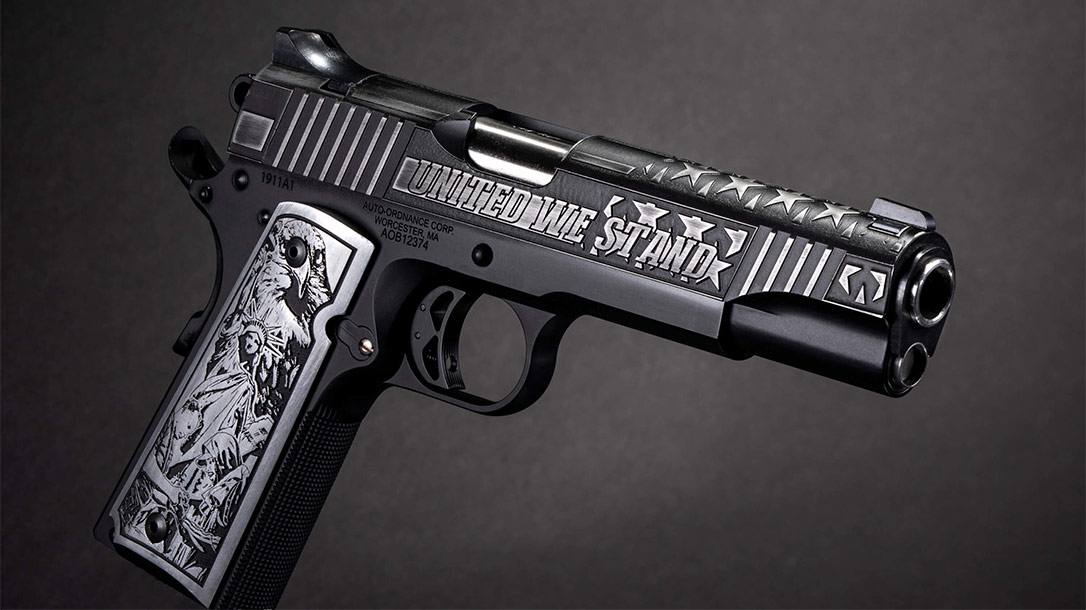 With approval from Smith & Wesson, the Gods of Olympus Engraver Series builds on the full size 1911 E-Series (.45ACP). Immortalizing some of Zeus’ absolute powers, the slide, frame, and grip feature cloud engraved scroll. Thus, representing his rule of the sky and weather. Similarly, the artwork on the sides of the slide further depict Zeus directing lightning, thunder, rain, and strong winds. While Zeus is portrayed in 24 KT gold-plating, his companion eagle (Aetos Dios) features copper-plating.

The obverse of the slide displays Aegis, Zeus’ shield and primary form of protection. The shield displays the head of Gorgon, the sister of Medusa, and made a foreboding roar during battle.

The custom forward and rear slide serrations additionally highlight the cloud theme. Just behind the rear serrations on one side is a depiction of a bull, an animal that Zeus often transformed into. Likewise, the opposite side features the eagle Aetos Dios with a number plate indicating the issue number out of 200.

A proprietary conversion coating provides a highly reflective Sky-blue background behind the gold and copper-plated artwork, furthering the sky theme. In addition, the frame flats feature a satin finish polish. Riding atop the slide is a new Novak front sight with authentic center set Yellow Diamond, embodying the grandeur of Zeus.

The interface between man and steel features Pearl grips with Greek key meander and grip art. On one side, Zeus sits on his throne, while the other depicts Mount Olympus. The hardware also features 24 KT gold and nickel plating, to highlight the filled engraving on the grips.

Limited to only 200 pieces, the Zeus comes with a commemorative 1-oz high-relief silver coin. The coin features Zeus on one side and Athena on the obverse. Additionally, the coin includes the observe marks of the Bank of Greece in Athens and the year of production.

The SK Arms Gods of Olympus Engravers Series Zeus Custom 1911 will be shipping from mid-February, with an MSRP of $2,800.00. For more info, please visit SKArmsVA.com.