It is an unfortunate fact that school shootings have been increasing over the years. The cause is a topic for another time, but the solution is becoming a pressing matter. Above all, the fact remains that it cannot be put off. One possible solution that has been floated over the years is arming our teachers. So, we took to social media, to ask you, should teachers carry guns in the classroom? 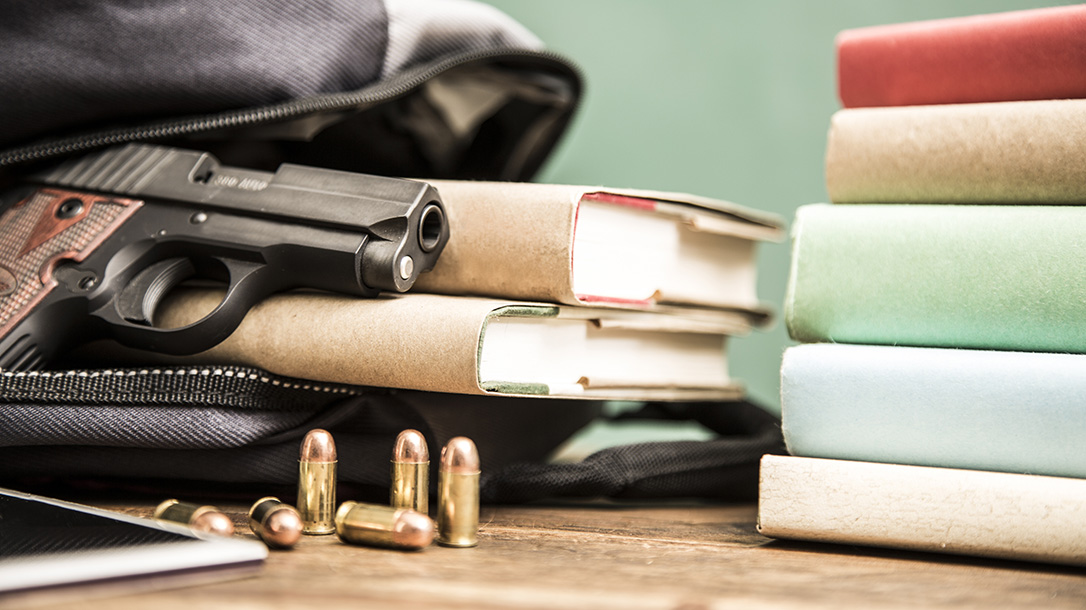 Should Teachers Carry Guns in the Classroom?

According to statistics from Statista.com, school shootings have remained under 50 a year since they started collecting data in 1970. This is with the exception of 2006, which saw 59, and 2017, which saw 57. However, something happened in 2018 causing school shootings to spike to 118. For the most part, it plateaued for the following two years, until spiking again in 2021 to a tragic 249.

It is clear that something has changed, and whatever it is, things are only getting worse. Up to this point discussions about how to curb it have been important. But we are now reaching a point where the discussion is becoming critical. It is also clear that anti-gun policies are not working. At all.

Lt. Col. Grossman speaks regularly on the subject of keeping schools safe and is clear that armed good guys deter school massacres. He points out that, when school murderers begin their crimes, they continue right up until armed opposition shows up. Grossman often discusses the 5 Ds of school safety: denial, deter, detect, delay, and destroy. As a deterrent, he suggests that many/most potential school attacks can be prevented by the presence of armed responders.

As we like to do, we reached out to our readers on Facebook to get your opinion. Is Lt. Col. Grossman right? Is an armed presence in our schools the answer? If so, should it be teachers? It seems that for the most part, the answer is a resounding “yes.” With some keeping it just that simple. Although many agreed that it is a good idea, some have stipulations, while others are not so convinced.

Many believe that it’s a good idea as long as they receive training and are willing to do so.

Comments such as, “Only if well-trained and volunteer to do so,” and “If they are willing to get training and want to,” were found throughout.

Although there was support for the idea, the most resounding detractors succinctly make the case that it has more to do with the teachers. It seems that theirs is not an anti-gun argument but one of trust.

“None I’ve ever met,” said one commenter.

Another added, “Most should not.”

However, perhaps the most prevailing idea was that of providing security in schools.

One reader commented, “No but [the] schools should have a decent police presence.”

Yet another asked, “I’m not so sure that that’s a wise choice[.] [H]ow about employing veterans and let them handle school security[?]”

“No, they have enough to do. Security should be handled by professionals!” continued a reader.

Another replied, “[T]eachers could easily get distracted doing their job. [W]ith their backs turned something bad could happen while carrying. Hire trained professionals whose only job is to protect and be ready if needed.”

An Armed Society is a Polite Society

It is clear from the discussion that whether teachers should carry guns is still up for debate. But it is clear that most feel that someone should be armed in the schools. Many feel that shootings will decrease with an armed presence. Whatever the case, the constitution must play a role.

As one commenter opined, “Should be up to the individual school district, based on what the community wants. Not driven by State or Federal rules.”

Where this will all lead is anyone’s guess. But the fact remains that we need to address this now and gun-control policies are not working. If anything, they are making matters worse. There was once a time when students came to school with a rifle in the rear window of their truck. At that time, school shootings were almost unheard of. Now, with the most prolific gun-control policies in our nation’s history, they are rising dramatically. It is time to pay attention to facts and look for real solutions.

One commenter got right to the heart of the matter when they asked, “Don’t you ever think how crazy it is that you live in a place where you would even consider asking this question?”