The past two years have witnessed gun sales the likes of which have never been seen before. It’s not just Red states either. Totals include big numbers in Blue states already home to some of the strictest gun control laws in the country. With the midterm elections less than 10 months away, elected officials supporting more gun control could have a rude awakening. This given the shifting Second Amendment support among their voting constituencies. 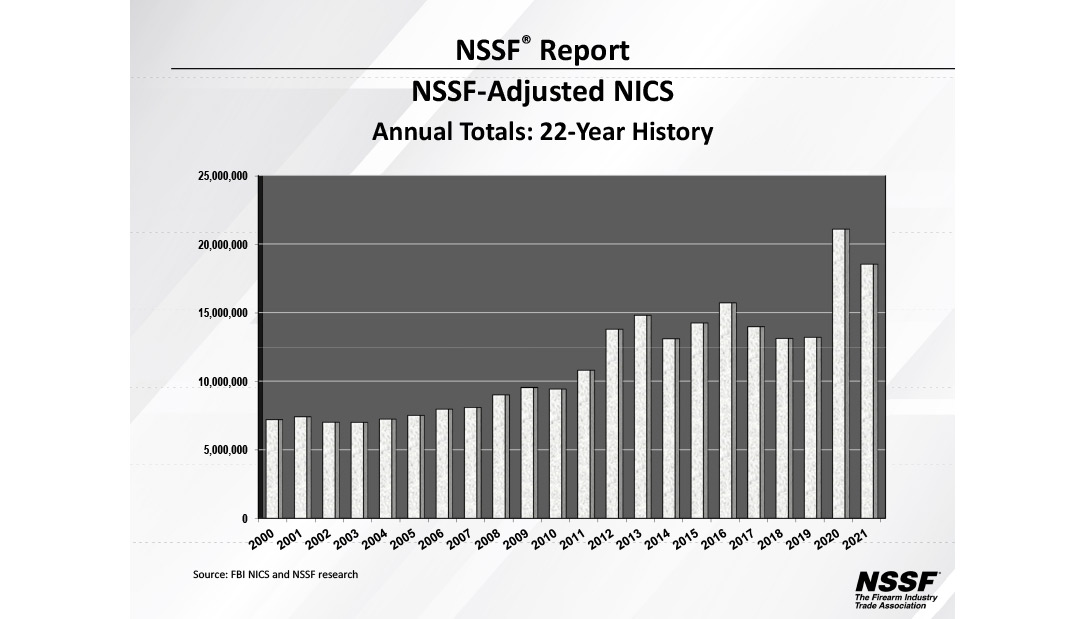 Law-abiding Americans took firm control over their personal safety and Second Amendment rights in 2020. As a result, they recorded 21 million background checks for gun sales. That number dipped only slightly in 2021 for a total of 18.5 million. Those numbers include more than 8.4 million first-time gun buyers in 2020 and more than 3.2 million in the first half alone of 2021.

Red, pro-Second Amendment leaning states were not the only states to process National Instant Criminal Background Check (NICS) verifications, however. Blue states posted some of the biggest figures in the previous 12 months, typically home of strict gun control laws.

Of the seven states that processed more than one million NICS checks in the last year, two have Democratic governors, Democratic state legislatures and strict gun control laws. According to NSSF’s adjusted FBI NICS data, Illinois led the way among background checks processed in 2021. Totaling more than 8.4 million checks for the year. An exception to most, that total includes checks run and rerun for Illinois Firearm Ownership Identification (FOID) cards. Likewise, the total includes Concealed Carry Licenses (CCLs). California came in next with nearly 1.5 million checks run.

In the nation’s capital, Washington, D.C., officials there processed almost 13,000 NICS checks for a firearm transfer. That number follows more than 11,000 during 2020’s buying spree. Compare this to less than 6,000 in 2019 before COVID shutdowns, riots and calls to defund the police escalated.

Even smaller Blue states, by population, experienced high marks. Connecticut ran more than 277,000 background checks. That’s the highest number since 2016’s 316,000 checks when the prospects of an antigun Democratic-controlled White House were possible.

“(Lawmakers) will frequently talk about Connecticut as the pinnacle of what gun control should be, but Connecticut residents don’t feel safe in their communities,” said Holly Sullivan. She’s with the Connecticut Citizens Defense League, a gun rights group that saw membership grow 40 percent to 43,000 members in the past two years. In a state with a Democratic governor, state legislator and strict gun control laws, “Connecticut residents continue to prove they want access to firearms,” Sullivan added.

Those sentiments reverberate from sea to sea. In California, P.J. Gomez founded the Latino Rifle Association and the group has already added several hundred members. “I don’t believe self-defense…should be exclusive to people on the right politically,” Gomez said.

Gun control groups saw the prospects of a President Joe Biden administration and Democratic control of Congress a year ago and salivated at the chance to push through more federal gun control. The American people quickly told them they had other ideas.

New data shows a clear majority – 52 percent – of self-described Democrats either personally own a firearm or live in a household with someone who owns a gun. National polling repeatedly shows gun control losing support.

That new reality has been a backstop against gun control efforts on the federal level and was realized quickly. President Biden was forced to withdraw two high-profile nominees, including paid gun control lobbyist David Chipman to lead the Bureau of Alcohol, Tobacco, Firearms and Explosives (ATF), after he couldn’t persuade even all U.S. Senate Democrats to throw their support behind them. The other was Saule Omarova, who testified she wouldn’t rule out another Operation Choke Point. She was nominated to become Comptroller of the Currency before withdrawing her name from consideration. Regarding gun control legislation, it’s been all misses as Americans rebuff any Congressional action.

Gun control groups across the board have been vocally disappointed in their failures to impose more gun control restrictions while still ignoring the criminals responsible for the surge in criminal gun violence.  Americans continue to tune them out and turn to their local firearm retailers for new purchases.

From local city council decisions all the way up to the White House, gun control advocates are getting a taste of medicine from the American people and it’s a bitter pill they can’t swallow. As they’ve pushed policies that have made neighborhoods less safe, law-abiding Americans have given back a dose of their own remedy – lawfully purchasing a firearm.

The midterm elections are 10 months away and candidates are already making their positions known on gun control. NSSF launched #GUNVOTE® to make sure voters know where candidates stand on Second Amendment issues so they don’t risk their rights at the polls.