Train the Mind to go Beyond the Mechanics for Increased Confidence

You’re set up at the shooting range and look down your sights at your target downrange. You’re about to take the shot and train your mind toward the process. “Slow and smooth press,” you tell yourself, as your finger starts to creep toward the back of the triggerguard, bringing the trigger with it. You focus on the movement of your finger, making sure it’s going as smoothly as possible for that perfect shot. 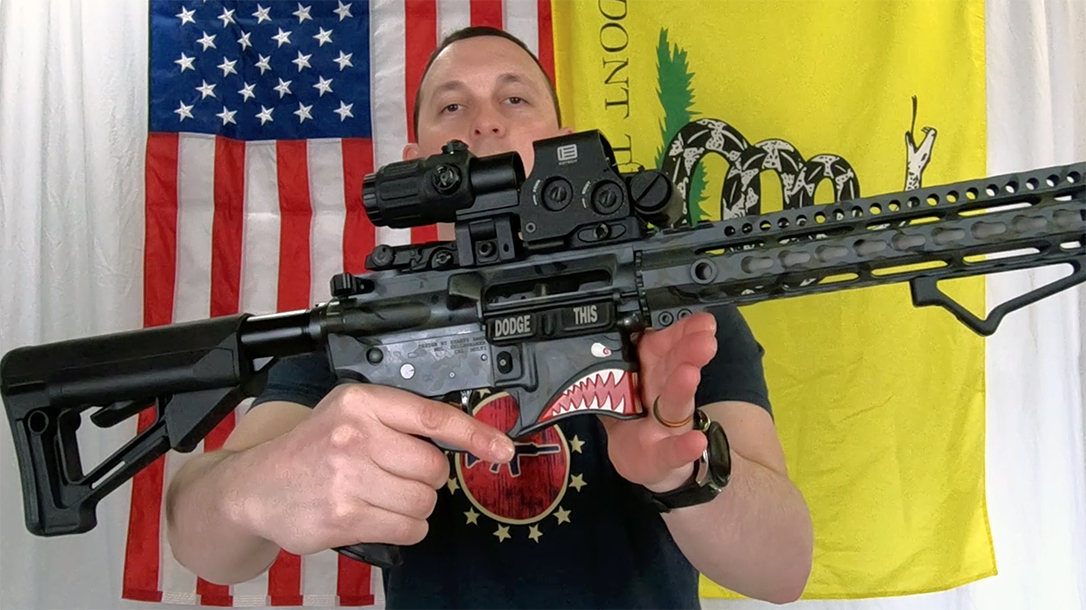 Train the Mind to Become a Better Shot

You think about your grip, making sure your finger is coming straight back. You’re becoming aware of where the trigger is touching your finger, and how you can start to feel the individual muscles in your hand . . . but now your sights have shifted because of how long you’ve been focused on your finger.

So, you readjust your sights and start the process all over again. This time you focus on your sight picture and crosshairs. So much so that your finger slaps against the trigger and snaps the shot. It’s nowhere near where you wanted it to be.

Then you come off the gun, frustrated and exhausted after just one shot because of the amount of mental and physical effort you’ve just expended fruitlessly. It doesn’t have to be as complicated as it all sounds. It’s all about your understanding and perception.

There are several factors that come into play when you’re mastering or improving a skill, especially shooting. The first I want to talk about is perception. Perception is such an underrated concept that many people quickly glance over or even just straight ignore it.

If you’re behind your firearm and don’t have the right understanding of what’s happening and what’s going to happen, there is a significantly smaller chance of success. Is there still a chance? Yes. Is that chance incredibly small? Also yes.

You can understand the basics of how pulling the trigger causes the bullet to go downrange. But if you’re nervous, doubtful, or distracted from that process at all, then your shot is going to be affected.

There are so many different things that you have the option to focus on when getting ready to pull that trigger: smooth press, aiming, breathing, the movement of your finger, the subtle pulse of the crosshair matching your heartbeat, and so on. That’s a lot of options for you to decide what to focus on. But you have to choose what to focus on as well as how to do it.

However, this doesn’t mean you have to make a list of everything you notice when you shoot, prioritize it and go through a list of steps to make sure that each one is taken care of. You’re allowed to think of the whole process however you like. This leads into the next topic I want to talk about…

The way you look at the process of shooting is going to change how confident you are. If you focus on every little detail, it can begin to appear overwhelming. While each individual detail may not be that difficult, when they’re put all together it can seem like a lot to handle in such a short period of time. This can be prevented with a change in your perception, similar to re-grouping or re-organizing all the information.

Shooting can be broken down into just a few simple steps: breathe, aim, pull the trigger. And these are the steps that people often break down even further and then become overwhelmed with.

A way of avoiding getting overwhelmed is to simply accept all the details. It may sound cheesy and philosophical, but if you accept the fact that all these extra steps are happening at the same time as those few basic steps, there’s significantly less pressure over the whole process.

That’s because, after accepting the details, you don’t feel as surprised or pressured to acknowledge them all one by one as you’re trying to take your shot. Because you already know about them and when they’ll happen.

This makes the process of shooting much less complicated, and it feels like a much easier task. Even though you’re doing the exact same thing. All the smaller details now seem to blend together into those few larger and broader steps.

Now you can practice those more often and more easily without being distracted by the smaller things, even though they still happen. There’s no need to worry about them when you know that they happen when you go through the larger steps.

This method is something that I’ve taken a long time to figure out and finally understand enough to put into words. Once I fully understood what was happening and how I was overcomplicating the whole process, I immediately saw a positive change in my results. I even felt surprisingly more comfortable with each shot.

The best way to describe it is like a temporary feeling of complete serenity. You’re aware of everything going on around you, but it doesn’t affect your focus on the target. You feel your body slow down as you get ready to take the shot, then the trigger goes back, and that bullet goes downrange.

After the shot, the world starts to affect you again. Nothing changes—it just comes back into focus, and then you realize you’ve only spent a brief moment taking that shot. Then you check your target and notice a major improvement in the results. That is essentially my experience with this method, and I believe that many other shooters would have the same experience.

This is not only for bolt guns or distance shooting, either. The exact same method works for working on speed and training drills, handgun and rifle, and so on. It’s the concept of changing your understanding that does all the work. Once you’ve done the slow practice and know all the motions and details, you can reorganize your thoughts about it. You realize it’s not as complicated as it may seem when you break it down into small things.

It’s all about understanding what you’re doing and realizing that it’s all going to happen, regardless of how fast or how slowly you go through it. So, you might as well realize that and go into it with confidence. Even if it starts with just a little bit more confidence, you’ll see an improvement in your results and how comfortable you feel handling your firearm.

The idea of confidence leads me into the last point I want to make, which is to be persistent but not stubborn. These words can often be confused with one another in meaning, but I believe it’s the way they’re used that makes the difference.

When you’re shooting, and things aren’t going as well as you’d hoped, this can very easily get under your skin and get irritating—especially with the price and scarcity of ammo. If that starts happening, just take a second to yourself, take a breath, go over what you’ve been doing and try again, or change something and try again.

Don’t give up because you’re having a bad day, though—that’s how things get worse. If you give up one time, it gets easier and easier to keep doing that. That’s what I consider stubbornness. Going at it over and over again out of spite rather than with the goal to improve.

Even if you want to get better, the way you go about it is what’s getting in your way. However, persistence is the mindset to keep trying and keep doing what’s needed to improve.

All in all, when you train your mind to look at things differently, it will greatly improve your results. And it’s not difficult, either. It may take a bit of time to understand and practice, but once you understand it, you’ll realize how much can change with just your mindset.

You’ll go from asking why you aren’t shooting well to asking what you should be focusing on. Then you’ll be seeing results.

This article was originally published in the Personal Defense World Gun Buyer’s Guide December/January 2022 issue. Subscription is available in print and digital editions at OutdoorGroupStore.com. Or call 1-800-284-5668, or email subscriptions@athlonmediagroup.com.