Although not new to the automatic knife game, Benchmade Knives is always innovating and improving. With states increasingly lifting restrictions on automatic knives, companies have been increasing supply to meet the enormous demand. With a long list of out the front and out the side automatics in its catalog, Benchmade now adds two more, with the Claymore and Shootout. 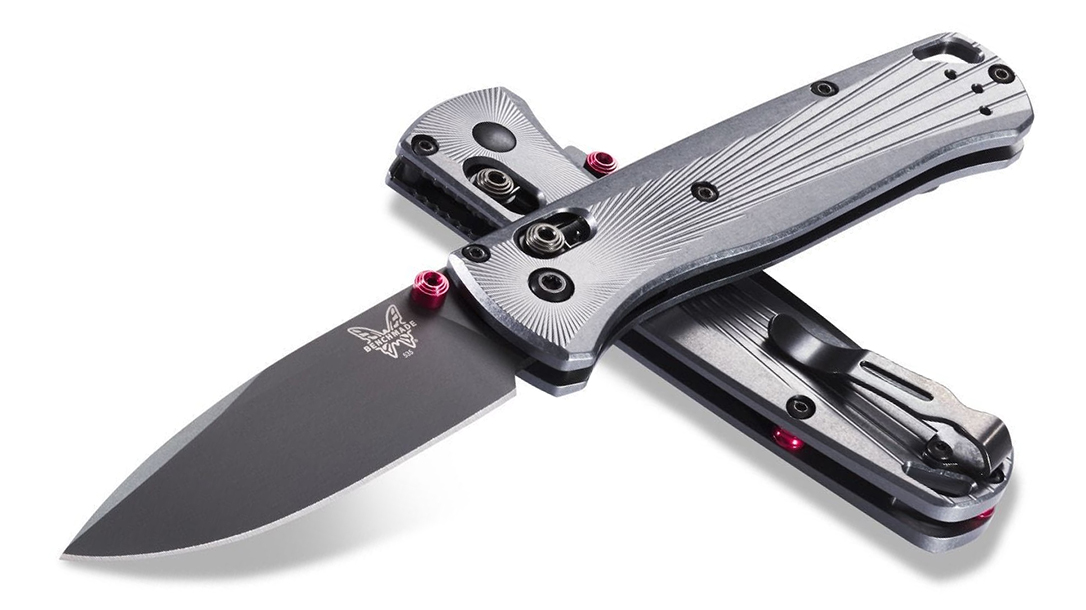 The Benchmade Claymore and Shootout

Two new knives in the Benchmade stable, the Claymore and Shootout represent two different actions. Because everyone is different, Benchmade includes offerings for both the OTF (Out the Front) and OTS (Out the Side) lovers. I personally prefer OTF because it is easy to operate single-handed.

However, there are features of OTS knives that many prefer for security and lockup reasons. Not to mention, you can open an out the side knife more discretely than an OTF. As a result, it is easier to use your knife among people who may not be ready to see a “switchblade” in action without freaking out a little. So, it all comes down to personal preference and individual needs.

The Claymore is reminiscent of the Adamas out the side auto, but with some solid improvements.

Featuring a 3.6-inch drop point blade (with slight swedge), the Claymore is available in either straight or serrated edge. Constructed of CPM-D2 steel, it has excellent wear resistance and edge retention.

However, unlike regular D2 (which is a semi-stainless steel), CPM-D2 has additional Chromium and is not stainless steel. So, it is important to keep an eye on the exposed edge for rust and keep it oiled when necessary. However, the majority of the blade features a Cobalt Black finish, protecting the steel.

The handle is constructed of Grivory and is available in either black or Foliage Green. Along the sides of the handle are embossed sections with stippled texturing for a secure grip, even when wet. Likewise, the spine and belly of the grip feature jimping at the butt and guard. The ergonomic design and subtle embossing along the perimeter of the grip make it very comfortable in the hand.

The guard rises at the thumb and drops at the index finger, ensuring that the hand doesn’t ride up on the blade when thrusting. A nice homage to its namesake, the guard features the raised Morse Code letters FTE—Front Toward Enemy.

The deep carry pocket clip comes configured in tip-up, right-hand carry but is reversible to left-hand carry as well.

I’m just going to say it, the Shootout is one of the coolest OTF knives I have used yet. It is an almost complete departure from the standard OTF form, and it does it really well.

Designed with law enforcement and tactical personnel in mind, the Shootout is an incredibly light 2.8 ounces. Compared with other OTFs I own, it feels like it is hardly there. The weight can be partly attributed to the CF-Elite handle. CF-Elite is carbon-fiber-filled nylon that increases rigidity and toughness while reducing weight.

Something I really like about the handle is its departure from the typical, straight, blocky form. Most OTF knives look like a piece of square metal with a blade that comes out the front. However, the handle of the Shootout has a more ergonomic shape, like a typical knife handle. Likewise, there is chamfering around the extremity of the handle, which adds to the overall comfort.

Jimping at the butt and index finger, coupled with texturing on the sides helps with retention during use. Additionally, two sandpaper-like panels sit just behind the blade on either side of the handle for maximum retention. At the butt of the handle is a carbide glass breaker for emergencies.

The blade is constructed of CPM-CruWear, which is essentially an upgraded D2. As a result, the blade has a nice balance of edge retention, corrosion resistance, and wear resistance. However, it is not completely corrosion or rust-resistant, so keep an eye on it. In addition, CPM-CruWear is fairly easy to sharpen.

Something Different About the Action

I knew there was something different the first time I slid the spine fire release button and the blade fired out with a pronounced Schnikt! I couldn’t quite put my finger on it, but it was not like other OTFs I have. So, I reached out to Benchmade and this was the reply:

“Using computer software, we were able to able to analyze the stiffness of the knife and specifically what frequency ranges would create harmonics,” says Benchmade Designer Engineer Mark Delplanche. “Those frequencies are what determine the acoustic signature of the Shootout. We analyzed other products that we liked acoustics of to determine the frequencies that were desirable and then optimize the stiffness of certain parts of the knife to reproduce a similar acoustic signature.”

He continued, “Sound design supports the consumers’ expectation of quality. We are all too used to cheap plastic products that break or bend easily. There is a certain tonal quality that those products tend to exhibit when excited, something an OTF experiences when fired. Unlike our folding knives which have open handles, we knew that the enclosed handle design of an OTF could create a sound chamber that may sound very ‘tingy’ and we were trying to avoid that perception and make it sound robust.”

It’s very hard to explain and is something you have to experience for yourself, but it feels smooth and substantial. As with all quality OTFs, the Shootout will not eject if there is an obstruction.

The Shootout comes configured for right-hand tip-down carry but can be switched for left-hand carry as well.

Some tests were specific to each knife but for the most part, I performed the same or similar tests with each. On top of these tests, I’ve been carrying the Shootout for a while now and it performs daily tasks regularly. It has taken everything I have thrown at it with no issues at all.

The first thing I was eager to test was the lockup of the Shootout. So, I took a phone book, placed a thick piece of leather on it and stabbed it forcefully. I’ll admit, I was a little nervous about this, but it almost buried the entire tip with no effect to the lockup.

I then took to cutting tires. For the Claymore, I selected a steel-belted radial truck tire, and for the Shootout a doubled-up mountain bike tire. Both cut easily through the tire with no issues. However, the Claymore hit a steel bead and got a slight glint on the edge.

Next, I used each to slice up some corrugated cardboard due to how tough it can be on an edge. Each knife slid right through the cardboard with no issues whatsoever and no effect on the edges. I followed this with some heavy-duty half-inch twine I have on hand. This is really tough twine and both knives sliced it apart easily.

Finally, I built a testing device my friend Michael Janich invented called Porkman, which simulates a human limb. After building Porkman with a pork loin, wooden dowel, twine, layers of Saran Wrap, and denim, I performed some slashes. Each knife glided right through the subject matter almost too easily. I definitely wouldn’t want to be on the receiving end of either.

When Michigan finally dropped the restrictions on automatic knives I was thrilled. Since that time, I have added some really great autos to my personal collection. Not surprisingly, a few of those autos are from Benchmade, now being joined by the Claymore and Shootout.

Although it may sound like hyperbole, the Shootout has been my EDC for over a month now and I don’t see that changing easily. However, the Claymore could easily fill that position as well, if not for my predilection towards OTF knives. But I do have to admit that even though I don’t carry it like the Shootout, I keep the Claymore on my desk and fidget with it. There is something oddly satisfying with how aggressively the blade slams into lockup.

If your state is one that has removed restrictions on automatic knives, I highly recommend either knife. You can’t go wrong with either selection. If you are unsure whether autos are legal in your state or jurisdiction, make sure to check www.KnifeRights.org/switchblade-legality before carrying.

For more info on the Benchmade Claymore and Shootout, please visit Benchmade.com.