by Todd Burgreen
in Guns, Rifles
0

It is nice to witness a product’s evolution. This is especially true when one has experience with earlier models and can better appreciate the modifications made. Primary Weapons Systems (PWS) has taken its concept of the AR rifle another step forward with its MK1 MOD 2-M series of long-stroke piston ARs. 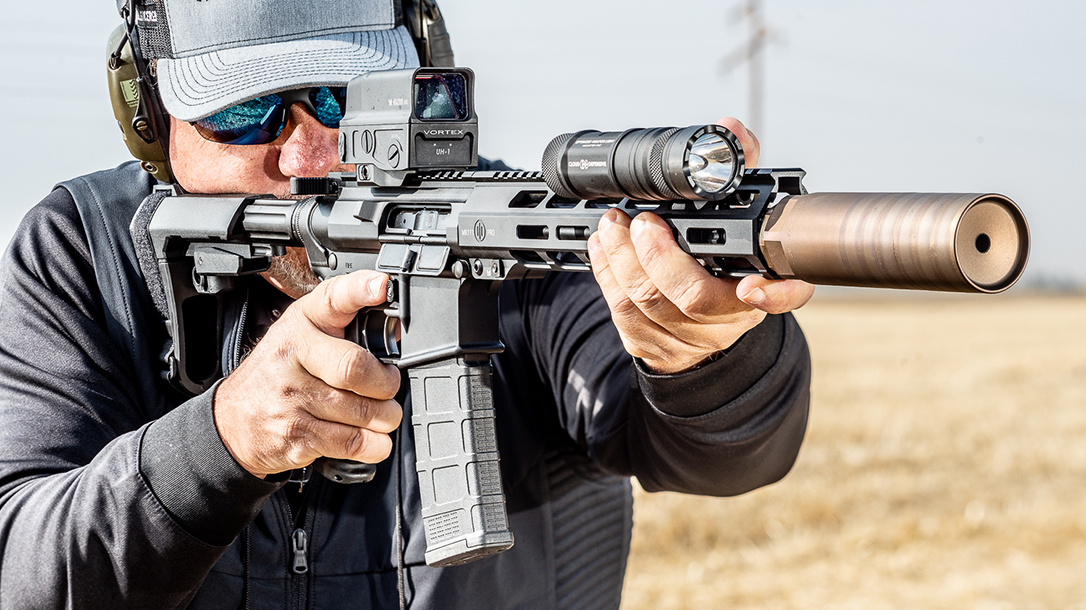 PWS literature clearly lays out the thought process behind the development of its Ars. This reflects an appreciation of the reliability of the AK-47’s long-stroke operation, combined with deep-rooted experience with M4 and M16 ergonomics. Even a cursory glance at the PWS AR bolt carrier group leaves little doubt about PWS’s different approach to an AR operational method.

Long-stroke piston operation is exemplified by the AK-47 method of having the operating rod connected to the bolt carrier. While short-stroke operation consists of a more complicated arrangement of gas imparting force to an op rod that impacts another part of the mechanism that acts on the bolt carrier.

The PWS op rod is connected directly to the bolt carrier through the charging handle. PWS believes that its long-stroke piston AR is an improvement over the legacy gas-impingement design. Not to mention the improvement over other AR designs featuring short-stroke pistons. This holds true especially as barrel lengths get shorter and/or there are suppressors.

PWS product improvements address any reliability and performance issues associated with the direct-impingement design. The PWS long-stroke gas system serves to isolate the action from heat and fouling. Especially when compared to the gas-impingement method of dumping gas directly into the action.

Anecdotal evidence of handling PWS bolt carriers just after long strings of fire and merely needing a quick wipe-down to clean them—compared to more in-depth methods required for their direct-impingement cousins—reinforces this.

The PWS MK1 series requires no tools for disassembly and features even less maintenance than other piston systems. PWS created a forward-canted “dwell” chamber in front of the operating piston’s head. This compares favorably to more typical horizontal or rearward angles associated with gas vectoring. The forward cant helps to minimize carbon buildup on the operating rod. Cleaning methods for the PWS are familiar to anyone with experience with the AR-15.

The PWS operating rod and bolt carrier group move together under the impulse of a fired round. This minimizes the chances of carrier tilt/bounce and cam pin wear, which can be problematic in some short-stroke AR piston designs. Overall, the PWS long-stroke design is simpler in operation, with fewer parts than short-stroke ARs. On top of this, the parts used are larger and more robust.

PWS continues to evolve its design. The weapons helping us to explore the latest PWS offerings are their MK116 MOD 2-M rifle and MK111 MOD 2-M braced pistol, both chambered in .223 Wylde. (More on the .223 Wylde later.) PWS uses forged upper and lower receivers.

The MOD 2-M has ambidextrous controls for the safety selector, bolt release and magazine release. Also, on the MOD 2-M, PWS eliminated the forward assist, performed lightening cuts on the upper and lower receivers and installed a PicLok forend. The PWS MOD 2-M features a three-setting adjustable gas regulator.

Another PWS enhancement is the Enhanced Buffer Tube (EBT). The PWS EBT is impact-extruded from 7075 aluminum to enhance strength and rigidity, and then mil-spec anodized.

A PWS proprietary Ratchet Lock design works with the EBT to eliminate the need to stake the castle nut. The Ratchet Lock is rock-solid, but still easily removable if need be. An extended lip on the buffer tube serves to further minimize the chance of carrier tilt. A Radian Raptor Ambidextrous Charging Handle offers the user plenty of purchase to operate the bolt group.

A quick word about the .223 Wylde chambering is in order. The .223 Wylde was designed as a match chambering for semi-automatic rifles. It will accommodate both .223 Rem and 5.56mm ammunition. It is relieved in the case body to aid in extraction and features a shorter throat for improved accuracy. In effect, the .223 Wylde is a hybrid, splitting the difference between the 5.56mm and .223 Rem, while offering improved accuracy and reliability.

Combat experiences since 9/11 served as catalysts for new types of optics, such as the Riton X5 Tactix, compared to non-magnified red-dot or fixed-power magnified optics.

The X5 Tactix offers a 1X illuminated reticle setting for quick target acquisition at close range with both eyes open. A quick turn of the knob to 6X enables longer precision shots. The ability to access 6X while still being able to use an illuminated dot at 1X is a force multiplier.

Testing and evaluation (T&E) with the PWS MK116 rifle with a Riton X5 Tactix optic produced consistent hits out to 500 yards on steel targets at Echo Valley Training Center (EVTC).

The PWW MK116 with a Riton X5 Tactix 1-6x24mm optic could be the answer to fulfilling a multitude of roles—DMR, general-purpose patrol rifle and CQB/entry weapon.

The 16-inch-barreled, 6.5-pound MK116 MOD 2-M showed its versatility by performing within EVTC’s 100-yard bays, the Jungle Walk range, and also back at the prepared firing position line with targets placed out to 370 yards.

The MK116 MOD 2-M was fitted with the FSC compensator, which offers recoil reduction as a primary function and flash suppression as a secondary function.

The port design keeps flash out of your optics and line of sight, while also reducing the distracting overpressure felt with many compensators. We ran numerous drills with the MK116 MOD 2-M, involving magazine changes and moving between barricades simulating cover.

The MOD 2-M’s flared magazine well assists with efficient magazine changes. Several of the more dynamic drills we ran during the T&E showed the MK116 MOD 2-M at its best—the gun exhibited unrelenting reliability, even when scorching hot after multiple magazines being fired consecutively.

The key with the PWS MK111 MOD 2-M is having a 11.85-inch-barreled AR that works and functions at the same reliability level as ARs with longer barrels. This is where the PWS long-stroke piston comes into play.

The MK111 is a natural for CQB roles, signified by its shorter-than-normal barrel length compared to standard M16 and M4 platforms. The 11.85-inch barrel represents the optimum crossbreeding of handling to cartridge performance.

The MK111 produces approximately 2,660+ fps velocity with the 55-grain/62-grain 5.56mm. The MK111 maintains rail space for solid purchase and accessory additions as mission dictates on the free-floating PicLok forend. (PicLok is a combination of the M-LOK and Picatinny attachment methods.)

Drills with the PWS MK111 MOD 2-M quickly moved past stand-and-deliver drills to more dynamic drills involving movement, magazine reloads and firing from behind cover. A Trijicon MRO HD was in place. The MRO HD expands upon the original MRO by offering both a 2-MOA dot and a segmented reticle more likely found in a laser holographic sight than a sealed reflex sight.

The MRO HD’s large tube provides superior field of view compared to many competitors’ red-dot sights. The Trijicon MRO HD and 3X magnifier combination is worth consideration, as it enhances performance via the flexibility of offering pure red-dot or magnification for longer ranges.

We fired several magazines’ worth of ammunition in engaging plate racks and man-sized steel targets with the PWS MK111. This allowed the PWS MK111’s potent firepower to shine. Firing from unorthodox positions while working around barricades shows why the lightweight MK111 is such an effective option.

The PWS MOD 2-M is not marketed as the least expensive AR option. The cliché of “buy right the first time” comes to mind. PWS ARs maximize effectiveness during a fight and for realistic training on the range.

The key component in a fighting rifle is reliability. No matter how accurate or powerful a rifle is, if it does not work 100 percent of the time it becomes a liability.

There are a plethora of AR-style rifles vying for consumer attention, whether for individuals, departments or other entities. The PWS MK1 MOD 2-M series is definitely worthy of consideration, given the company’s attention to detail, along with the quality of the materials used in its manufacture.

This article was originally published in the Personal Defense World Gun Buyer’s Guide August/September 2022 issue. Subscription is available in print and digital editions at OutdoorGroupStore.com. Or call 1-800-284-5668, or email subscriptions@athlonmediagroup.com.