The Athlon Outdoors Rendezvous is a holy gathering of gun nerds that takes place in the shadow of the Grand Tetons Mountain range every year in October. Manufacturers trot out their latest and greatest, while geeks like me get to paw over it all and claim it’s work. The super special treat for me this year was a certain retro classic from Springfield Armory and its SA-35. 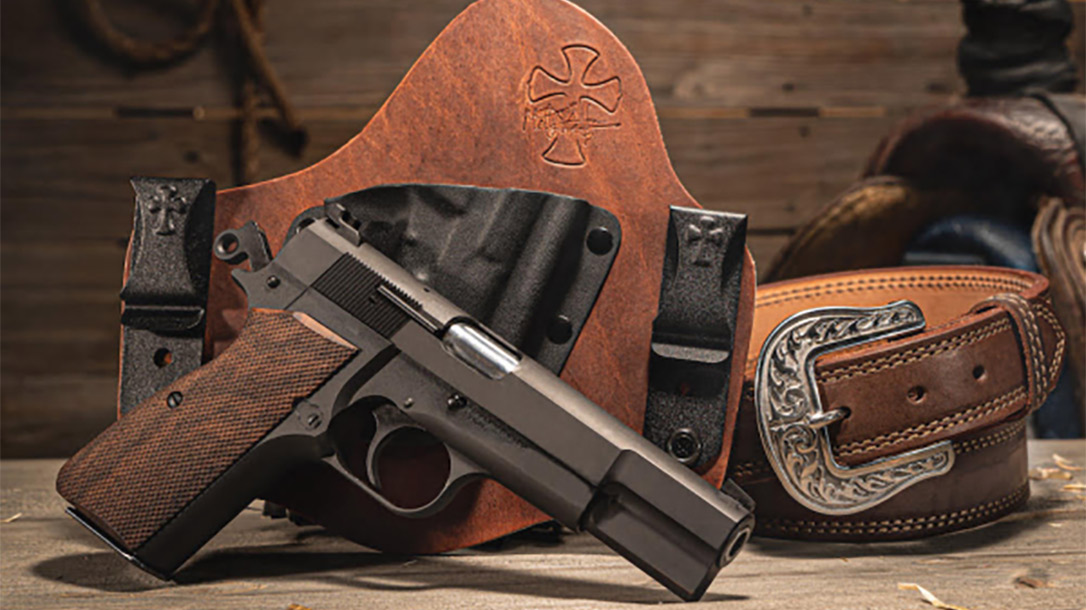 Did you ever just marvel at the technical brilliance of some remarkable contrivance? When I was a kid a telephone was as big as a sneaker and tethered to the wall. Nowadays there are 7.1 billion smartphones riding about in people’s pockets. 89.9 percent of the world’s population uses them. Times have certainly changed.

While we put-upon American gun owners are indeed pretty quick to gripe when our elected public servants strive to restrict our Second Amendment rights, ours nonetheless remains the most heavily armed population in human history.

A stroll through your local gun emporium demonstrates a simply breathtaking array of defensive firearms of literally all shapes and sizes. If you have human hands you can find a gun to suit your particular anatomy. If you don’t have human hands, then I am genuinely impressed with your reading comprehension skills.

Amidst all that cool stuff there yet remained one glaring omission. Modern guns can be had with frames crafted from polymer, steel or aluminum. The many-splendored nuances of barrel length, finish, magazine capacity, trigger and features are the spaces where dreams thrive or die.

However, up until now there was a single niche in the pantheon of modern handguns that was egregiously overlooked. Nobody in the United States made a production version of the one gun that birthed them all—the inimitable Browning Hi-Power. Thankfully, the good folks at Springfield Armory have just fixed that for us with their uber-cool new SA-35.

Some mechanisms are apparently flawless. The paperclip, the claw hammer, the mousetrap, Vise-Grip pliers and my wife leap to mind as proper examples of contrivances at the apex of their mechanical evolution. Those things simply cannot be improved upon. In the world of firearms, one mechanism likewise reigns supreme.

John Moses Browning was the most gifted firearms designer who ever lived. The great man had 128 patents to his name when he died of heart failure at the FN factory in Liege, Belgium, in 1926. Browning designed every rifle-caliber automatic weapon used by American forces during World War II. That guy was a gun-bodging savant.

His M1911 pistol had already changed the way the world made handguns. When tasked to craft a pistol and associated cartridge with which to arm American troops fighting radical Islamists during the Moro Insurrection in the Philippines around the turn of the 20th century, Browning simply took the European standard 115-grain 9mm bullet and doubled it. The resulting 230-grain .45 ACP sets the standard for combat handgun effectiveness even today.

The M1911 was a locked-breech, short-recoil handgun that operated via a pivoting link attached to the barrel. This mechanism was reliable, accurate and rugged. However, call me a heretic if you must, it still wasn’t quite perfect. In June of 1923 Browning filed a patent for what would ultimately become the Browning Hi-Power. This mechanism was apparently the pinnacle of handgun evolution.

That’s not hyperbole. Whether your favorite combat pistol has FN, Glock, HK, Canik, SCCY, Walther or Springfield Armory on the side, they all run off of the same basic short-recoil, locked-breech design pioneered in the Browning Hi-Power. This mechanism is fairly simple and yet remains sufficiently reliable to drive almost every modern combat handgun on the planet.

The SA-35 is classic Hi-Power tweaked ever so slightly for the Information Age. The barrel locks to the slide at the moment of firing via the linkless wedge system used by most of the world’s combat pistols. The interface between the slide and barrel does not require a bushing, while the left-sided magazine catch and slide release are in the perfect spots.

The left-sided thumb safety is very slightly enlarged over that of the original 1935-era Hi-Power. This appendage is larger than the original yet smaller than the later versions to come out of Belgium. I think it’s perfect. This switch is easily accessed yet small enough not to hang on stuff or get in the way.

The original Hi-Power magazine carried 13 rounds. By the pre-war standards of the day this was a simply breathtaking capacity. However, nowadays we can do better.

The new Springfield Armory SA-35 packs 15 rounds into the same space. I have no idea how they pull that off. Magic, I guess. I tried these new magazines in a couple of my WWII-vintage Hi-Powers and they fit and function just fine there, as well.

The front sight is a fixed blade with a white dot, while the tactical rack rear sight is drift-adjustable for windage. Belgian Hi-Powers were available with all manner of fancy adjustable target sights, but such stuff leaves me clammy in a combat pistol. The sights on the SA-35 are perfect for its intended mission.

The finish is an attractive dull blue, while the grips are classic stained walnut. The overall aesthetic is utilitarian yet classy. For target work, service use, personal defense or concealed carry the SA-35 combines Information Age awesome with Old World combat chic.

The trigger is simply delightful. The original single-action Browning Hi-Power trigger was hamstrung by a ghastly magazine safety. That first Hi-Power was designed as the result of a set of specifications for a new French combat handgun, so I assume that’s where the abominable magazine disconnect safety originated.

I have always been of the view that stuff that mechanically disabled my pistol was bad. The point here seems to be that if grappling for control of a handgun, then one might simply eject the magazine to render the gun inert.

My take is that there is a stronger probability that you might drop your magazine before the gun runs dry and have need of that round in the chamber before you might get the fresh mag in place. I dislike magazine disconnect safeties on basic principle.

This contrivance also originally conspired to taint the trigger slightly on those early guns. The new Springfield Armory SA-35 thankfully does away with that superfluous rascal. As a result, the SA-35 trigger is nigh heavenly.

The external ring hammer on the SA-35 is easily accessed and designed to preclude hammer bite. The end result is a gun designed to be carried in Condition 1 with a round in the chamber, the hammer back and the thumb safety engaged. This requires a certain level of gunmanship to be executed safely. However, the argument could be made that if you cannot manage your weapon safely in this state you might need a bit more practice.

In a word, swimmingly. The SA-35’s trim architecture makes for comfortable carry, even concealed under something minimalist like shorts and a t-shirt. The gun falls into my hand like an old friend. The double-stack magazine drops free and yields a grip geometry not unlike Goldilocks. For me, it’s not too big and not too small, but rather just right.

As the frame is steel there is enough mass to easily gobble up recoil, so follow-up shots are smooth and fast. The friendly single-action trigger lends itself to both accuracy and comfort. Unlike the striker-fired guns that are so popular these days, there is little concern with trigger stacking or sponginess.

The SA-35 points naturally and runs like a crack-addled cockroach. By modern standards, the gun is substantial without being obese. The trim geometry makes it easy to pack, while the double-stack, single-feed magazine offers plenty of on-tap chaos.

There is no Picatinny rail on the dust cover. However, most concealed carry holsters do not readily accommodate lights or lasers anyway. The end result is smooth, sleek and svelte, the very image of the alpha combat handgun.

This is the world’s most perfect handgun action. Add that splendid single-action trigger and you synergistically create a delightful range experience. Should you ever find yourself reaching for the SA-35 while out where the wild things roam, you will be ideally equipped.

The Springfield Armory SA-35 fills a massive hole in the American gun culture. Little runs nicer, even today, and this svelte Old World, steel-framed smoke pole is made right here in the USA. This is, indeed, the gun that birthed them all.

If you’ve never run a Hi-Power before you should give it a try. John Moses Browning was a freaking genius, and his rarefied sense of mechanical brilliance graces every sensuous curve of the timeless Hi-Power. Combine this classic combat pistol with modern high-tech social bullets, and you have the ideal defensive solution for the security-minded shooter with an appreciation of the finer things.

I had wanted an SA-35 for years without even realizing it. I had a pair of Hi-Powers that rolled off the lines in the 1940s, but those were collectible guns, not working guns. By contrast, the Springfield Armory SA-35 is the Hi-Power you can actually use.

With an MSRP of $699, it is within financial reach of the typical American working man, as well.

This article was originally published in the Combat Handguns March/April 2022 issue. Subscription is available in print and digital editions at OutdoorGroupStore.com. Or call 1-800-284-5668, or email subscriptions@athlonmediagroup.com. 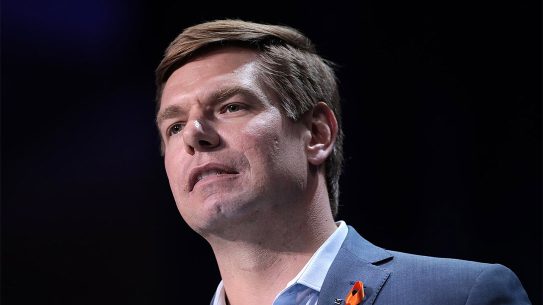 While the Democrats are busy creating a Ministry of Truth, representatives like Eric Swalwell...