I’m sure you have heard about the January 6th circus sideshow playing on prime-time television currently. How could you not? It’s been hyped as the worst thing to happen in our country since the dawn of civilization. But have you heard about the crazed gunman who showed up at the home of Justice Brett Kavanaugh with plans to kill him? 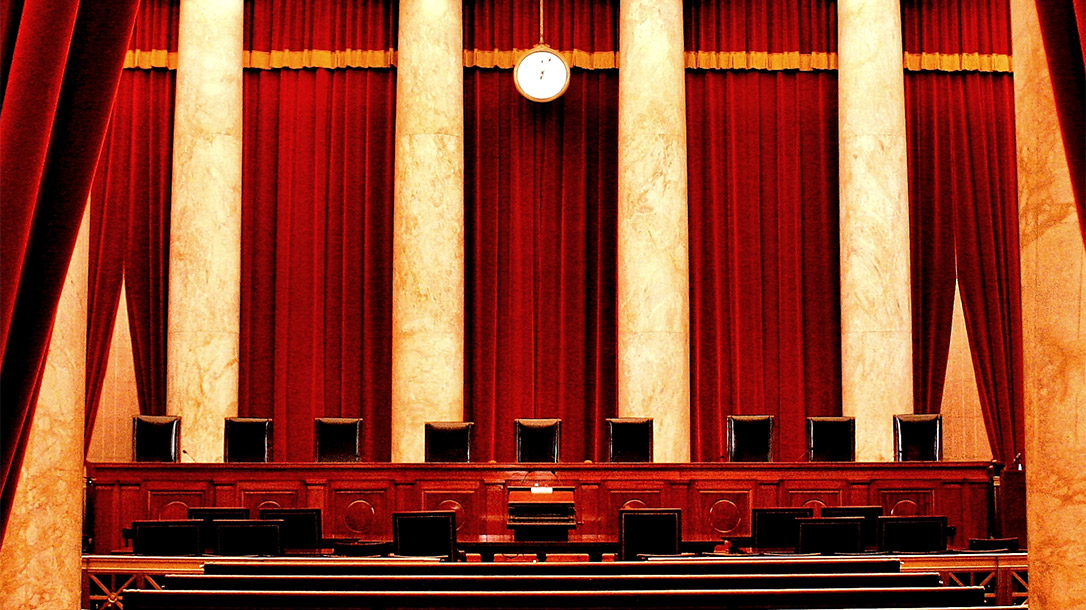 This seems like the kind of thing that would receive a lot of coverage. Especially considering the hatred the left has for guns. However, this particular case is not very favorable to Democrats. Why? Because as keeps happening time and again, they incited it. I’ll get to that shortly.

According to the Washington Post, “A California man carrying at least one weapon near Brett M. Kavanaugh’s Maryland home has been taken into custody by police after telling officers he wanted to kill the Supreme Court justice.”

As it turns out, this wasn’t just a random case of a man with a gun near the home of Justice Brett Kavanaugh home. This was a calculated operation with a very dark intent.

The Washington Post goes on to say, “He wore black clothing and carried a suitcase and backpack with weapons and other supplies, including a Glock 17 with two magazines and ammunition, a tactical knife, pepper spray, a hammer, a screwdriver, a crowbar, zip ties and duct tape, along with other gear, according to court documents.”

The article also indicates that the gunman planned to break into Kavanaugh’s home and kill him as well as himself. This was an end-game scenario and the gunman stated that killing Justice Brett Kavanaugh would “give his life purpose.”

Give Us What We Want, Or Else

According to details, initial evidence indicates that the man was angry about the leaked draft of an opinion by SCOTUS that it is planning to overturn Roe V. Wade. In a rational society, people would take the loss, regroup and think of ways to utilize the democratic process. However, it appears we are no longer living in a rational society.

Breitbart News states, “This is all on the media and Democrats who have demonized and scapegoated conservative justices as ‘threats to democracy’ and worse. And in the case of Kavanaugh, the media demonized, smeared, and dehumanized this good man as a serial rapist and sexual predator.”

The Washington Post story mentions that the gunman was also upset about the recent mass shootings. So, he grabbed a gun and intended to kill a sitting SCOTUS justice.

Where Was the DOJ?

Attempting to intimidate judges or juries is against federal law. And for good reason. However, for some reason, the DOJ allowed this behavior for almost a month.

18 U.S. Code § 1507 – Picketing or Parading states, “Whoever, with the intent of interfering with, obstructing, or impeding the administration of justice, or with the intent of influencing any judge, juror, witness, or court officer, in the discharge of his duty, pickets or parades in or near a building housing a court of the United States, or in or near a building or residence occupied or used by such judge, juror, witness, or court officer, or with such intent uses any sound-truck or similar device or resorts to any other demonstration in or near any such building or residence, shall be fined under this title or imprisoned not more than one year, or both.”

It is very clear that the intimidation tactics of the pro-abortion movement are in direct violation of federal law. However, Merrick Garland and the DOJ refuse to act.

According to Breitbart News, a month ago, “And yet, even though this is the law, hundreds of pro-abortion loons are flagrantly violating this law by doing exactly that: protesting outside the residences of six justices in the hopes of persuading them to rule a certain way.”

Even though there was an attempt on the life of a sitting Supreme Court Justice, the DOJ still refuses to act. Not only does Merrick Garland refuse to act, but he also won’t even answer for his lack of action.

A Breitbart article following the incident states, “In response to Rubio’s concerns that some protesters were breaking the law by picketing or parading outside the residence of a ‘judge, juror, witness or court officer,’ the Justice Department said they could not comment on the matter, as per longstanding policy and practice of the DOJ.”

To make matters worse, on the day of the attempted murder, House Democrats stalled a bill providing additional security for Supreme Court Justices.

Not surprisingly, blocking the bill only emboldened the protestors. And now they are even doxxing the children of sitting Justice Barrett:

Something seems very off when our sitting representatives refuse to protect the justices of the Supreme Court. I can’t help but wonder what their game is. Especially considering that they are complicit in inciting this violence. This is all very odd and more than just a little disconcerting.

For all of their cries about the violence of the right and their constant prattling on about January 6th, Democrats sure do love to incite violent tactics.

The J6 witch hunt continues to claim that Trump’s statement to “peacefully and patriotically protest,” is an incitement to violence. So, I thought it would be fitting to take a look at their own words leading up to the threat to Justice Kavanaugh’s life.

Jen Psaki clarifies that it is the President’s position that “we certainly continue to encourage that outside of judges’ homes.”

Likewise, Psaki excuses breaking the law by protesting outside of the homes of Supreme Court Justices:

Likewise, Vice President Harris made a call to arms stating, “We will use all available options when the Court rules. Our collective charge in this moment is to fight for the health safety and well-being of all women with everything we’ve got.”

Senator Klobuchar speaks of getting up tomorrow and fighting. I remember when they used to say this was inciting violence:

I have to admit when the Mayor of Chicago sends out a call to arms that is a little worrisome. Chicago is a pretty violent town—this could go sideways fast.

But Mayor Lightfoot didn’t stop there:

Vogue not only justifies these tactics, but they even posted a photo of the front of Kavanaugh’s home. Likewise, the article details why “Inconveniencing Brett Kavanaugh Right Now Is Good, Actually.”

Did He Really Just Say That?

Perhaps the most chilling example of all is President Biden’s appearance on Jimmy Kimmel when he predicted a mini-revolution. How is any of this ok?

In a recent appearance on the Sean Hannity Show on Fox News, Senator Rubio sounded the alarm:

“I have a terrible feeling about this, Sean, I think this is headed in a very dangerous direction. I think the last time I was on the show from this very studio, I said that at the time, and here’s why: this is a country, 331 million people, OK?

“You have people out there basically saying that these members of the Supreme Court are equivalent to the Ku Klux Klan to Nazis. You’ve had some sort of saying burn the place down. Three hundred thirty-one million people, it only takes a couple of them to look at that and say, well, if these people are that evil, the next step is to just take them out.

“And that’s just the Supreme Court justices, not to mention we’ve got hundreds of members of Congress that don’t have U.S. marshals outside their home, and you know we want to thank the U.S. marshals for the role they played we will be having a very different day here today in Washington,” the Senator said.

I can’t help but think that Democrat voters approve of gun control because they know that they themselves cannot be trusted with them.

To date, protestors remain outside the home of Justice Brett Kavanaugh. Even though it is a federal crime to intimidate judges or juries, the DOJ is allowing this to continue. When one party politicizes federal law enforcement and encourages violence against their political opponents, this is what a real insurrection looks like.

This cannot continue. These tactics are taking us down a very dark path in our country’s history. We currently have an entire government waging a violent war against half of its citizenry, and we cannot survive much more of this.

Hopefully, the midterm elections will be the opportunity we need to restore balance in our republic.

Until then, keep your head on a swivel and stay frosty. These people really mean to do us harm.