Most folks will recognize Savage Arms as manufacturers of value-packed hunting rifles and shotguns. Tough and economical, their guns have targeted serious hunters who place more worth on form and function instead of pretty cosmetics. With the sale of Savage in 2019 they decided that they shouldn’t neglect one of the hottest areas of sales. That being concealed carry handguns. So, for the first time in more than a century, Savage will manufacture and sell a handgun that is easy to conceal. Introducing the Savage Arms Stance. 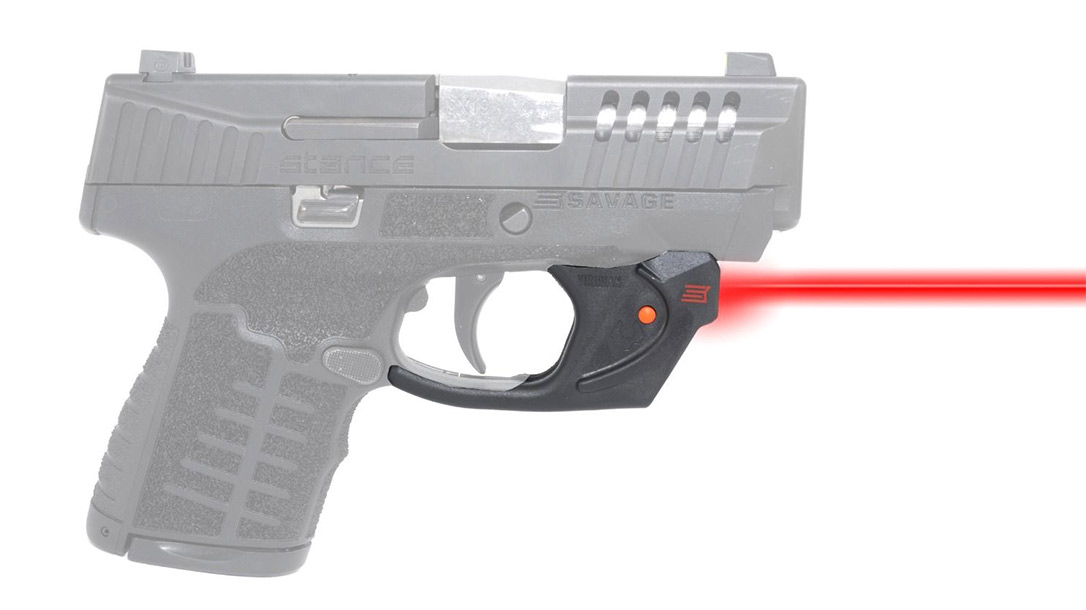 In late December of 2021, the Stance was introduced to America’s shooting community. It is a polymer-framed, striker-fired semi-auto chambered for the popular 9mm cartridge. It comes with a seven-round, flush-fit single stack magazine as well as an extended magazine with an eight-round capacity.

Savage includes two different backstraps: one mostly flat and the other arched to better fit the shooter’s hand. It is a trim and stylish pistol with subtle, yet useful, frame contours that, along with its 18-degree ergonomic grip angle, make the Stance a very comfortable gun to shoot.

Savage textures the Stance’s grip at all points of contact with the shooter’s hand. The grip texture has the feel of emery cloth and should provide a secure shooting grip even when wet. Shooters have the choice of black, gray or Flat Dark Earth polymer grip frames.

The Stance uses a stainless-steel sub-chassis, which is serialized, making it possible to change the grip color and/or configuration at some point in the future. Savage makes the Stance southpaw friendly by incorporating an ambidextrous magazine release button and slide lock.

Additionally, the Stance can be had with or without a manual safety—my sample had a bi-lateral thumb safety. To make the Stance painless for deep cover carry, Savage trims these manual controls to the smallest usable dimensions possible. More on this later.

My test samples’ trigger breaks at 6 pounds of pressure. It’s a tad heavier than I prefer but probably just right for a defensive gun where adrenaline and other factors come into play. Savage polishes and rounds the trigger face for painless shooting.

Savage machines the Stance slide from stainless steel and then blackens it with a Melonite process, which not only increases the surface hardness but also provides an added degree of corrosion resistance.

Cocking serrations are cut front and back, and the forward slide serrations include ports on both sides of the slide through which the bright stainless-steel barrel can be glimpsed. Rifled with the common, for 9mm, 1-in-10 RH twist, the barrel is 3.2 inches in length and has a viewing port at the top of the back end of the chamber for users to easily ascertain if the chamber is loaded.

Savage fits an external extractor to the Stance slide and bevels the ejection port for ease of carry. To give the gun enough spring mass for proper cycling with nearly all loads, the Stance uses a dual-recoil spring system.

Given the Stance’s short barrel length, I set my target stand out at 15 yards. I fired three, five-shot groups with each ammunition and the best group is reflected in the accuracy chart.

Quite honestly, the Stance is more accurate than I was able to shoot it. Its 6-pound trigger hampered my ability to keep the sights aligned all the way through its press. Had I been better at doing this, I think the gun is capable of firing 1-inch groups at this distance.

Black Hill’s 115-grain JHP produced the most energy with 319 fpe while Hornady’s +P 124-grain XTP rounds fell just behind it with 316 fpe.

Regarding the +P loads, Savage’s manual says, “The Stance series of pistols are designed to withstand ammunition pressures generated by +P rounds…but such pressures may affect the wear characteristics and result in the need for more frequent service. Plus P Plus (+P+) must never be used as the pressures generated could be dangerous.”

Pretty standard stuff. Make sure your expensive defense ammo cycles properly in your gun and use the cheaper range ammunition for practice. That will save wear and tear on the gun, you, and your wallet!

I also shot the Stance at a steel target in an effort to see just how quickly I could shoot it. It points really well, and I was able to find the sights very quickly as the gun comes up on target. Double-taps were a little sluggish, and I felt that the trigger’s reset could be stronger.

The ambidextrous slide stops are so small that I wasn’t able to drop the slide on a fresh magazine from either side. No worries here, as a simple tug to the rear of the slide disengages the slide stop and lets it run forward, chambering a cartridge.

My test sample had the bi-lateral manual safeties, but again I found the controls so small that it was hard to disengage them without compromising my firing grip.

The good news here is that you don’t have to use the manual safety, and the pistol will then act and function just like any other striker-fired gun. Keep your finger off the trigger until you’re ready to shoot!

Disassembly is intuitive and does not require any tools. After removing the magazine and clearing the gun’s chamber, lock the slide to its open position and rotate the disassembly lever downwards and give the rear of the slide a short tug rearward then let it run forward off the frame.

Do not, repeat, do not pull the trigger. There’s no need to pull the trigger in the Stance’s disassembly process. The dual-spring recoil assembly can then be removed followed by the barrel. This is as far as you should disassemble the gun for routine cleaning.

The Stance performed well enough that I would not discourage anyone from using it for concealed carry. It is reasonably accurate and cycled flawlessly. It is constructed from premium materials and possesses great cosmetics and a superior finish. Likewise, its extremely thin profile should make it a pleasure to carry.

Four years ago, the Stance might have been America’s top-selling pistol! But we live in the age of high-capacity micro-compacts. So, we fear that the Stance’s maximum 10+1 capacity might ding sales a bit.

That said, Savage is offering some 28 SKUs when it comes to color and different sight systems they are carrying.   Will the Stance be able to compete with higher capacity, optics-ready offerings? Only time will tell!

This article was originally published in the Combat Handguns May/June 2022 issue. Subscription is available in print and digital editions at OutdoorGroupStore.com. Or call 1-800-284-5668, or email subscriptions@athlonmediagroup.com.